A bunch of us got together and decided to celebrate Sex Scene Saturday. :D

I picked Hey Jealousy for your fun and reading pleasure (sex after the break) and I'm happy to let y'all choose next week's story, just holler.

Check out some of my fellow participating authors: 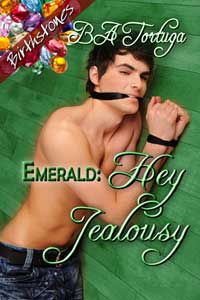 What follows is not safe for work. ;-)
BA

"This is fucking insane..."
No. No, for once, they were doing something fucking right. "This is good, Rory. Just go with it." He'd prove himself this time. He so would.
He pushed at Rory's shoulder, got the man bent over the table, one hand on the small of Rory's back. Those hard thighs spread, Rory's balls hanging. Fucking hot. This was what Rory'd been wanting, probably what he'd been getting, from someone else. This was what Rory needed, what he was so ashamed of he couldn't ask for it.
Now he was going to get it from JW. He smacked a few more times, a little harder.
A low moan sounded, then Rory's butt shifted, pushed into a slap. Jesus. The man was moving, just loving what he was doing. Thing was, JW was liking it, too, his hand throbbing.
JW's mouth was dry, his eyes were fucking burning in his skull, not wanting to miss a second.
His hand was on fire, his cock was pressing on his zipper, and he could feel sweat trickle down his back. Fuck. He leaned down, tongue sliding over Rory's skin. It was surprisingly hot on lips. Hot with a tinge of salt.
Oh, God. He closed his eyes, sliding to his knees. He breathed in Rory's scent, happy as he'd been in a long time.
"Dub?"
Rory's scent was fucking everywhere. "Mmmhmm. You smell good." He rubbed his cheek on Rory's ass. Just like he was a cat or something. He was arching, his toes curling.
"Oh, God. I'm fucking hallucinating."
"You hallucinate about me and your ass?" That skin was red, little fingerprints standing out all over, fading together to make an amazing pattern.
"What I dream about ain't none of your business."
"No? I think it's all about my business. I told you I got your back." JW bit into the flesh of one asscheek, punishing a little.
Okay, so hearing that husky moaning sound rocked his world, almost as much as feeling Rory buck against him. Fucking A. Groaning, he licked where he'd bitten, needing to taste again. He was panting, his heart pounding.
"Fuck..." Rory spread a little wider, nails sounding on the table as the man scrabbled for purchase.
"Anytime." He meant it, too. Rory was a kinky little guy, right? Those hips canted for him, a clear offer. Jesus. Yes. JW loved to fuck, loved to slide deep into hot ass and push until he came.
He traced that hot crease with his finger, licking his lips as he watched. Rory was shaking for him. Oh, fuck. Hot. That tight little hole clenched, damn near like it was kissing his finger.
He pushed, because he couldn't not. He wasn't going much farther without slick, but damn. He had to feel, had to know. Tight. Perfect. Oh, fuck yes. Rory took him in, sweet as pie.
"Ro, I need something. Condoms. Lube." It was amazing he could still talk, his voice raw and hoarse and almost gone. .
"Bedroom." That one word was like a damn key in a lock, like this was it, somehow. Time to make shit right.
JW sprang to his feet and grabbed Rory, hauling the little bastard to the bedroom, just like that. He flung Rory on the bed and started digging in the matching nightstands. He took a second to stare. Damn. Just like in the one dresser drawer there were plugs. Cock rings. A fucking paddle.
His whole body went ping, but he ignored all that this time. All he needed was that little tube and one foil packet.
"We don't have to do this." Rory was hard as a rock, leaking, needing him. Those green eyes watched him, shadowed with doubt, hot with desire.
"Yes, we do." He tossed the condom and lube on the bed and started stripping off clothes.
"Oh, fuck." Rory's eyes were burning, looking hard, one hand working that fat prick.
"Don't you go off without me." He snapped it out, and Rory jumped, letting go of his cock. Oh, Jesus. That was... To know that Rory would take his orders like that made him moan, his balls pulling. "Get the lube, man. Start getting ready for me."
Rory nodded, belly flushing a dark red. So fucking hot. And his, damn it.
His.
Rory grabbed the lube, slicked up those callused fingers, and then pressed two in that tight little ring of muscle. JW watched, hands on his shorts while he forgot his own name.
"Take them off, Dub. I want to see." Rory was rippling, dancing on those fingers, body moving in slow, sensual rolls.
"You do, huh?" He grinned a little, thinking how long it had been, how they used to do their thing in the dark when they were drunk. Then he pushed his shorts down, his cock springing up to slap his belly. He hoped to hell Rory liked what he saw.
Rory groaned, tongue flicking out like the man was hungry. Fuck. Fuck, yeah.
Needy little fuck. JW was gonna turn him inside out. Then he was going to put Rory back together so he could do it again. He grabbed the condom, slipping it on while Rory worked that little hole. He pushed between Rory's thighs, spread the muscled legs wide. He wanted Rory to watch, to know who was fucking that little hole.
He wanted the man to know who would be the only one to do it from now on.
"Dub. Need."

JW thinks he’s missed his chance at a romantic relationship with his best friend Rory forever, all because of a stupid moment when he was much younger. Rory wants JW desperately, but he knows his buddy just isn’t into the kind of games Rory likes to play, let alone into long-term relationship with a guy. When JW comes home from a long haul on the road, though, and finds Rory in a compromising position, he knows he’s found the way to correct his youthful mistake. Will Rory believe JW’s jealous response?

NOw that was a sexy little excerpt. Thanks so much for sharing it with us :D