Y'all have been so dear, writing and squealing about the Ranch Hands (which I will cook and take pictures of, I swear, I just need to make beans first...) that I decided to share some of the other recipes that we play with around here. What's the goal? Well, I admit it, I hope y'all share with me. Cooking is one of my favorite things in the history of things and, since I'm gluten free, I don't eat out a whole lot. We all get into ruts and I'm hoping, if I share, y'all will too.

Fall showed up in central Texas Saturday (don't worry, it's supposed to be back in the upper 80s by tomorrow, we won't get used to it), and I promised Julia that I'd make her potato soup the first day it was cool enough to.

I love potato soup, love it. My mother makes it, my sister makes it. I make it. I know, intellectually, that we all make it differently -- after all, I've been playing with this recipe for 30 years -- but in my heart, it tastes like my mother's, like home and warmth. :D 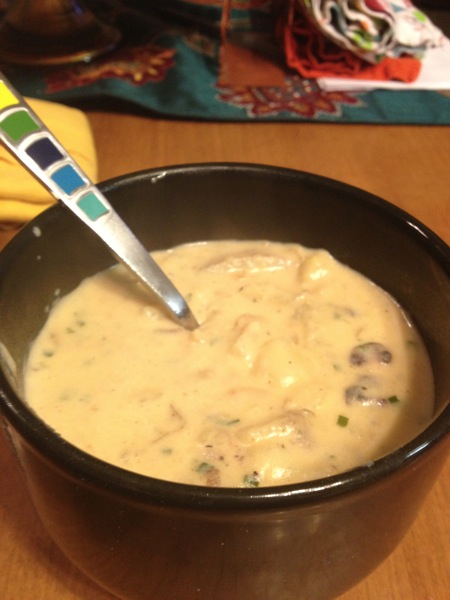 So, get a nice big heavy pot and put your potatoes and your chicken stock together and cover. This is the time consuming part and the part where you're most likely to screw up. Too hot and you'll burn the taters. Too cold and you won't be eating until midnight. ;-) I start out at medium and raise the heat as the potatoes cook.

While the taters are cooking, put your bacon, onion and garlic in a little skillet and let them render.

(If I'm making cornbread or cheese breads or popovers, I start them.)

Once the potatoes are softening (you poke them with your spoon and they'll crumble) and your bacon/onion/skillet of the good stuff is cooked. put your bacon/onion mixture in. You'll need to judge on the grease in the pan. Lots of times, there isn't grease to speak of, but if you've got a lot of grease, don't put that in your soup, strain it out. It'll make it nasty.

Add in the milk and sour cream and cheddar, stir and let it heat up before you put your spices in.

Now, I don't say how much spice to use, because really, it's up to you and your mouth. We like it spicy, so there's lots of mustard and cayenne. Start with a little, stir and taste, then add more.

I have found, if it doesn't taste right, add more celery salt, but that could just be me.

That's it. It makes 4 huge bowls, it heats up nicely, it's pretty and tasty and homey and will warm your bones.

Here's the link for the free ebook that inspired me to share this recipe. I'd love to hear y'all's best fall soup recipe, honest. We're always looking to experiment. 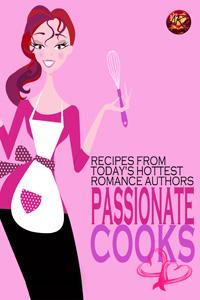 Your soup sounds yummy and your mother loves you so

And because I love to share this recipe, I offer in exchange my black bean soup recipe.