Guess what, y'all... I wrote a New Adult story 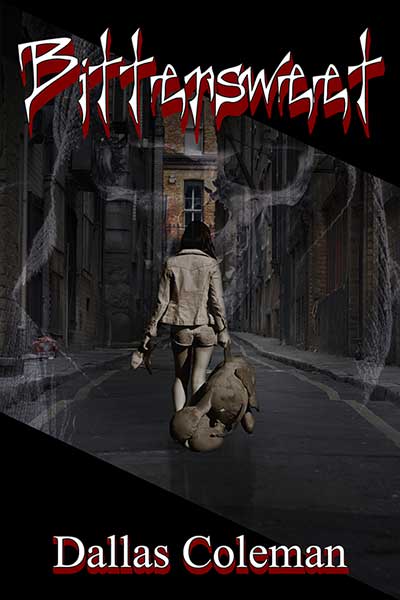 So, here's the deal.

Back a while ago I was writing a serial fiction for A Turn of the Screw under my gee-this-is-darker-and-considerably-less-BA-than-normal pen name, Dallas Coleman, and, while the story was good, I had to admit at the end that it wasn't a romance. After sitting on it for a while (like more than a year), I reread it and went, huh.

This is a good book.

It's scary, fast-paced, has characters I love.  It's urban fantasy, on the dark side, and totally built around young adults.

So, I spent a few months revising and rewriting, then sent it to Prizm and Kristi took it.

Bittersweet is the first book in a series set on the West Coast in a fictional city named Tame Harbor. Tame Harbor is, like many cities on earth, filled with normal folks doing their jobs, doing their day-to-day thing. It's also filled with demons. Vampires. There's been more than one werewolf, and there's a group of young people living in the industrial area of town that spent their time battling the baddies.

The problem is, their den mother is pregnant with twins, two of their members are infected with vampirism, and one of them just came back from a Pack Gathering knocked up.

Not only that, but poor Spook is wearing the demon who destroyed his lover's soul around his waist in a belt buckle and he's pretty sure that the demon that's squatting in the local coffeeshop is a bad ass.

Spook walked across the room, heading right to the corner. Lola was right. There was something here.

God, he was tired. He'd worked all night slinging hash at the Station, then had crawled to the flat, where Lola had been waiting, gauzy fabric draping her, softening the sharp angles and the bulging belly where the babies -- babies, where the fuck were they all going to raise babies? -- were growing. It wasn't really his turn to go tracking, but Harry was down in the sewers looking for a shifter, Kat was working a shift at Jojo's and Greg and Nan were both... well, hibernating.

Until the sun went down.

Damned blood suckers. Really, Nan was cool, because she was a nurse, but Greg was a bicycle messenger and they didn't work third shift. Damn it.

So, the Queen Bee and all-around pain in the ass bitch had given him twenty dollars and an address, telling him that Lightning McMann -- bum, nutcase, and uber-talented sensitive with a Meth habit -- had been having problems at that new coffee shop on West.

"Why did I move out here again?" The words were not even loud enough to be a whisper, really, because he knew the answer.

He'd moved because queer, Goth, psychic club kids with the ability to sniff out evil weren't really necessary in Amarillo.

Or, really, suffered to live.

The coffee shop was nice, though. Freak-friendly, with a safe-for-the-mundane vibe and a couple of the good chairs. Looked like a place for a little band on a pseudo-stage, too. Wicked.

There was a family sticker above the door, which had him eyeing the twins behind the bar with a distant, sort of prurient interest. There wasn't a thing between them, though, barring that normal sibling, you stole my Cheerios and kissed a boy first kind of mucky connection multiplied by dude, we have matching DNA strands.

Pity, because that would be relatively pretty jack-off material.

Something flared across from him, something willful and damned angry, with a connection that felt like being slapped with a bag of used coffee grounds. Well, hello, aren't you awake and aware and a little possessive?

He put his coffee mug down, watching the clouds of milk in it settle out, reflecting the light from the street outside, the people walking by, and...

He grabbed his cell phone, dialed up the Loft.

Bittersweet will be available from Prizm Books on November 14. :D

Thanks! It comes out Wednesday and I'm stoked!