I'm tickled to share my blog today with the amazing Elise Hepner. :D I had the good fortune to meet Elise at Authors After Dark in Philly and, y'all, talk about a dear, charming lady that can make you smile with just a word. Lord have mercy.

She was a perfect fit for a guest blog, I swear. :D 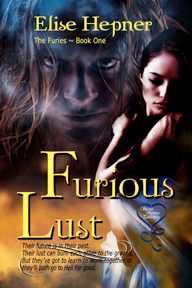 Before I started this book I’d heard about world building extensively from all my author friends who kept World Bibles, OneNote files, and any other digital/notebook compendium way of keeping information in one place that you can think of because writing a paranormal series can be tricky. Does that mean I knew what I was getting into? Yeah, that would be a negative.

First thing I did was go to my local bookstore and pick out a copy of Writing the Paranormal Novel by Steven Harper. The second thing I did was fall to my knees with the naive idea that world building would be hard. No, building an entire way of life from inside my head isn’t hard—it’s epic, cue soundtrack music reminiscent of anything ever played in the background of World of Warcraft. I felt like I was waging war with my brain every time I sat down to think about anything. But, oh, how the slim little volume helped me out big time. It covered things that didn’t even cross my mind about the what’s, why’s, and who’s of making a paranormal world completely concrete and in short, it was my special little savoir.

But once I got over the extreme task of tucking in details I began to reap the enjoyment of sticking in one extra known fact that no one would probably ever see in the light of the book, but that I knew existed. Those little details were so much fun! I’m a very structured person, so the fact that I could endlessly add onto my world and create anything blew my mind. But once I let go I asked “why” a lot and it was as if I was following a small trail of breadcrumbs from one thought to the next, which was a certain kind of organization too.

From start to finish writing Furious Lust was an experience I’ll never forget because it pushed me so much mentally and emotionally, but as I’m writing the sequel, Furious Temptation I’m finding even more little tidbits to build my world. The fun surprises never stop. I guess that’s the perk of writing a paranormal series, the world is never shut down, the work never stops and it grows with you. With that much work, this world better be my best friend for life.

One mistake can change a life—let alone an eternity.

Tisiphone’s a revenge demon working for Hades in the Underworld torturing damned souls. When she escapes for three days under the sun with a human male, her leash is pulled tight. Tisiphone’s banished from the Underworld to Earth and stripped of her demonic powers. But that’s not what drives her horrendous nightmares.

Cithaeron’s human life was dedicated to revenge, until a demon walked into it. The wickedly intense, sensually destructive Tisiphone takes over his life with probing questions and haunting caresses. It’s over in a blink. After centuries of torture in Limbo, Hades brings him back for a judgment call that could change their intertwined lives—dead or alive.

Their future is in their past. Their lust can burn each other to the ground. But they’ve got to learn to work together or they’ll both go to Hell for good.

He moved me with confidence, our hips rolling from side to side while his breath eased across my neck. His clean cheek lightly brushed mine. Before I’d found any composure goose bumps dotted my arms and I sensed the curve of his lips against my ear. We worked as one to the techno rhythm that replicated the beat of my heart—my pulse plunged into a rather embarrassing quickness.

Through my leather skirt his warmth soaked into my flesh radiating body heat upward through my breasts. My nipples pebbled with sexual awareness, my belly twisting into a labyrinth of knots. His body was tightly pressed against my lower back so there was no question as to whether or not he was enjoying our dance. As his fingers guided the swing of my hips, for once, I’ll admit, I was captivated. While I wasted no time reaching behind me tracing up his arms, shoulders, and chest with my hands.
There was a certain seductive slowness that set him apart from my usual partners. He didn’t lack confidence. Much could be gathered from the way a man danced with a woman and my body wasn’t lying to me. I’d learned to trust my instincts. My partner was special.

His fingers slipped beneath my clingy, vinyl tank top playing along my ribs. When his hands tightened along my naked flesh our flirtation deepened into a more serious encounter. Despite his hold, I couldn’t avoid savoring his warmth. My first touch of cleansing fire, a comfort, and the key to my arousal. My fingers eased through his soft hair tangling in the strands at the nape of his neck. For the briefest of moments, I entertained the fact that he might go further, cupping my breasts and brushing his calloused thumbs across my tingling nipples.

But his hands squeezed tighter along my waist, though we moved as if nothing had changed between us. Would it be wrong to admit I enjoyed this edge? Whatever the game was between us. Even the subtle brush of my stockings against my inner thighs left me wide-eyed and wet between my legs. We were playing with fire.

His possessive, too hard touch promised an outcome I couldn’t fathom. A jolt of fear prickled beneath my skin. Though I faltered in my steps, the stranger only pressed harder against my hips with his chin casually resting on the top of my head. He never missed a beat, while I was shivering in his embrace.
My throat was constricted to a knot while my instincts shot off sparks inside my body. Yet, I was drawn to him. I moaned when his rough, long fingers slipped down beneath the top of my skirt idly following an outline of the waistband across my stomach—and lower. There was no going back now. Beneath the scent of sweat and alcohol that permeated the club, a familiar charred wood-smoke scent lingered on my clothing.

It was only a moment before I completely understood my situation, with a jolt that sent my mind reeling. My weak-kneed acceptance was replaced with ironclad knowledge of the man at my back. His almost unbearable heat lingered inside me. The scent of the Underworld clung to the strands of hair across my face. His unwavering grip. But perhaps, for a second—if I could take some more time to think—

Unable to fully process, automatically my arms dropped from around his neck and my hands clenched into fists. Realization left me cold and aching. Without knowing who I was facing, without my powers, it would be foolish to spin on him and attack. But my need to vent my rage left me seething. One of the most sexual moments of my existence in recent history had been dashed.

Whoever he was, he was working for them—the Underworld.

He’d stopped dancing against me and his breath against the nape of my neck spun me deeper into a confusing hole. It cannot be so. But when I broke our contact from hips to head glancing down the smooth line of my body—Apollo’s balls, I knew those fingers as if they were my own. Could I bring myself to turn around? To look him in the eye?

“Tisiphone,” he murmured low and cool against the lip of my ear.

I saw his face as if it wasn’t dark in the nightclub—as if my past was yesterday. His low, pleased voice triggered a darkness inside me that I was afraid to acknowledge. His fingers pinched into mine as I tried to pry his hands off me, until I softly cried out. But he let me go, letting me know with his continued presence at my back that he would have kept me there if he wanted to.

There would never be enough space between us—this wasn’t real.

I turned until I’d locked eyes with his pale gray irises—but they weren’t gray anymore—and not because of the harsh dancehall lighting. While I searched inside his shining coal black eyes, I sensed the trace of brimstone magic within him. His tongue casually flicked across his lips. An unreadable expression, even with neon lights spinning and whirling across him.

If he were truly of my old world, his skin would be shiny as an oil slick—black with dappled rainbows beneath the chaotic light play. In the night he’d be purely human in appearance until any ray of light caught his flesh. But there was nothing. Nothing that was recognizable but tan, human flesh like mine.

What have they made him? What have they done? Brimstone. Black eyes. No pulse. But looked human. His heat—the undeniable heat of those from the Underworld because though creatures there have no need to breathe or bleed, the temperature at the Earth’s core isn’t anything to trifle with on a whim. He carried the depth of heat that my kind engineered as a defense mechanism to live in the Underworld.

That was my answer. I couldn’t deny it any longer. I knew—gods, I wished I didn’t. I wouldn’t wish it on my worst enemy. Not even a man who had unknowingly condemned me to live a life far from my sister’s for hundreds of years.

Thanks for having me, hon! Can't wait to see you again at the next con :)