Sage hopped down and walked to the barn, whistling loud enough that the critters and Daddy could hear him and not be surprised. He looked out over the pasture as he went; the grass was browning, proving it was just on the other end of vicious Texas summer. Late September could be deadly—hot and humid, with air that felt like syrup in your lungs.

Daddy was singing, the words stuttering a bit but sounding loud and clear. Sage joined in, singing old Bob Wills songs like he had just come home from the store a half hour ago, not damn near eleven years ago.

Daddy’s head whipped up, but Sage saw no censure, no disappointment, nothing there but a huge grin, and they rolled into the big finish together, yodeling like fools. 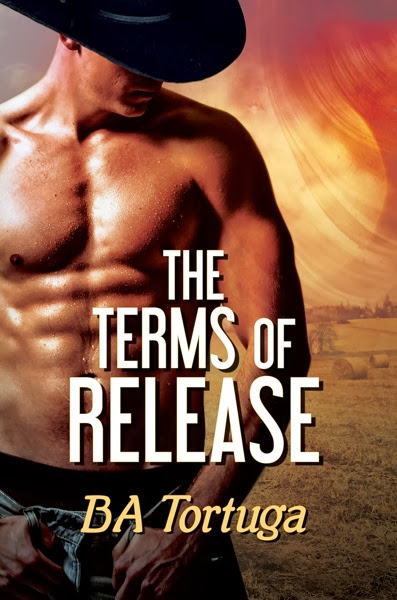 The Terms of Release is releasing March 24, 2014 from Dreamspinner Press and I’m proud enough to bust.

They say a man can always come home. So after doing hard time, Sage Redding heads to his family’s northeast Texas ranch to help his ailing daddy with the cutting horses.

Adam (Win) Winchester is a county deputy and the cousin of one of the men killed in the incident that sent Sage to prison for almost a decade. While Win's uncles, Jim and Teddy, are determined to make Sage and the entire Redding family pay for their loss, Win just figures Sage has paid his dues and maybe needs a friend. Maybe he needs more than a friend. In fact, Win’s counting on it.

No one’s denying Sage is an ex-con who went to prison for manslaughter. Regardless of the love he has for his father, he’s returned knowing things will likely go badly for him. Maybe a man can always come home, but he may not be able to stay.

OH this one looks so good. Pretty sure I missed out on the signed copies though LOL. That's a great idea though!