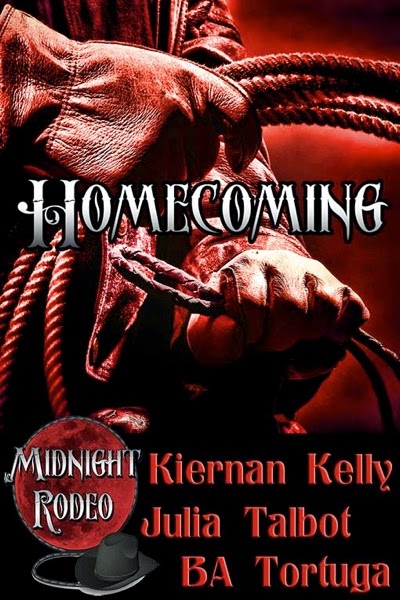 The show didn’t start until tomorrow night, and Denver wasn’t going to survive another night alone. If the kid, Blaine, wasn’t coming after him, that meant another two would, and he was hurting.

Two broken ribs was the worst of it, but he didn’t have a single square inch that wasn’t sore, not a muscle that wasn’t screaming, and damn it all, he needed a full night’s sleep.

When the knock came to his trailer door at seven o’clock, he almost screamed, but he went to answer, Brax’s beautiful yellow-green eyes glowing in the gathering gloom.

“Green, the pride is meeting. All of us. Come let us welcome you back.” The kit’s whiskers were damn near vibrating.

He grinned. “Are you sure everyone wants to welcome me?”

“Everyone. All of us.” Brax leaned in, rubbing their cheeks together. He did love the way the kitties showed affection.

He let Brax lead him away from the trailer, back to the odd, amazing sets of gypsy tents the felines lived in. He loved the smells there, his nose working, picking out smoke and fish, spice and musk.

Oh, he had missed Brax, the whole Pride.

“Shan honey!” He grabbed the kit up and spun him around with a laugh.

It had been more than that, but Shan had a kitty memory.

“Too long.” They rubbed cheeks, greeting each other happily.

“There are a few new ones to meet.” Shan tugged him deeper into the kitty colony.

“I’ll find you, Green. Promise.” Brax waved, and Denver followed happily, his nose working overtime. He grinned. Dent had never understood his need to be with the cats. Never.

There was something about them, though. Joyful and warm and easy-going, but toothy and intense when it mattered. Shan tugged him around, all sorts of cats saying hi, and they stopped before someone new.

Lord, this one was the size of a house. One big hand swallowed his. “Good to finally meet you,” Dmitri said in heavily accented English.

He shook hands, then they shared a quick man hug. “What do you do here, honey?”

“Security, mostly. And I make stir-fry.” The big guy had an Eastern European accent and vaguely Eurasian face. Tiger, maybe?

“I love a good stir-fry. Water chestnuts. Crunchy.” He grinned, tension easing off him.

“Yes. Make you lick your chops.”

The pride was coming, the fire in the fire pit glowing. The near two dozen males gathered in pods, while the females with kits stayed away, then still more guarding the perimeter.

“Come and sit with us.” Dmitri still had his hand, and more of the males approached, giving him a drink, offering food.

“You sure y’all want me?” The pack would have a fit, but he needed this right now.

“Of course we do!” Dmitri looked shocked. “You are friend, Denver. Even I know of you.”

“I had to ask. In case the pack snarls.”

“Let them.” Brax came bouncing back, hugging him hard. “They know better than to mess with my family.”

He let Brax’s scent wash over him, his body heavy with the weight of exhaustion. “Just need to rest.”

“Need to rest. Smoke. Need petting.” Brax moved to work his shoulders as he drank deep.

“Oh.” He moaned a little, his head falling forward. One of the little males came up, took a long slow drag from a joint, and leaned in to offer him a shotgun. Denver put one hand on the kit’s neck and took the smoke in, luxuriating in touch.

“There you go. That’s better.” Brax purred softly. “Me next.”