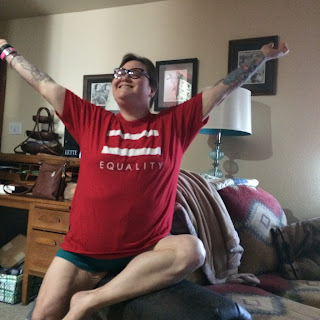 Like a lot of people out there, I spent yesterday in happy tears. I swear, I got dick-all done, I didn't write, I'm not 100% sure we cooked supper (although, I suspect Julia did), and I was basically worthless as tits on a boar hog. I'm serious as a heart attack (which I always type attach, blergh), by the end of the day I was too pooped to pop.

I keep thinking about all the things -- y'all know, in that ALL THE THINGS way -- the joy, the haters, the political ramifications, the personal ones, the bizarre path that I took to stand where I'm standing, who I'm standing with.

I've told y'all before, when and where I grew up, there were no LGBT people and, while we knew gay men -- my Uncle M, his beloved partner R, lots of Mother's friends -- there were no lesbians. They were something that did not, under any circumstance exist.

I was madly in love with my best friend in high school. I'm serious. I would lay there beside her at night and just vibrate. We used to have people call us 'lesbos' at school, tease us (One particular lunch period someone threw a brick at us. I don't remember his name, I bet C. does), but we both had boyfriends, we both had sex, we both were what we needed to be to survive small town Texas.

Flash forward to my senior year in high school where I was married, pregnant, terrified and scared (it's a long story, don't ask, you wouldn't believe me anyway) and the plans of going away to college to be with the girl I loved were dust. Or three years later when I weighed well over 500 pounds and was trapped in a relationship that was unbalanced at best, and she introduced me to her girlfriend and I was so jealous I wanted to die.

Another three years and I was in love with another woman and being told "you should thank God every time he doesn't hit you" and believing that. Knowing that I would lose my child if I came out of the closet (and believe me, both the ex and the ex-in-laws made that clear).

I thought about dying a lot.

Then I went to college, discovered political activism, found out that there were a number of lesbians on earth, remembered that I wasn't a worthless piece of shit, and discovered the internet.

The internet brought me my best friend who introduced me to my wife.

Together J and I started the first online m/m romance publishing company. She convinced me to move from horror to romance. I convinced her to... hell, I don't know. I can tell you that the day I knew I loved her, I knew I couldn't do what I'd done for so long. I couldn't stay in the world I knew and pray that it would be enough.

She didn't pull me out. I came out because I needed her to know that I could be brave enough to be who I was, to walk away from diseased bullshit, and be the woman I could be, with her.

For her, I could be brave.

Two years ago family members that are supposed to love told us that they didn't think we should be allowed to get married. That we didn't deserve the legal protections that institution brought.

We were told that we just needed to keep our mouths shut and be careful.

I haven't been careful one second since I asked her to marry me. I left home to live somewhere that believed that all couples have the right to be married, to be happy and have the legal protections that marriage brings.

Do I believe that the SCOTUS decision fixes things everywhere? No. In fact, I think right now is probably a very dangerous time to visit my hometown because a lot of those people are feeling attacked and defensive and ready to eat someone's face. Hell, we'll probably still be incredibly careful traveling to places where we can't be assured of hospital visitation rights being honored.

But it's a start.

It's a huge step forward.

I'm a small town girl, that's it, but here I am, and thank goodness, yesterday, we all took another step forward.

Excellent heartfelt post that warmed our hearts. So glad you & J are living you're HEA!!

Wow! What an amazing and emotional post. I can't even imagine going through some of what the two of you have gone through just to get your HEA. I'm glad that it finally has happened - I know there's still a long way to go, but HELL TO THE YEAH! For that step!!!

I love you now and always have. I have always been proud of you. I wish you could have had an easier life. But I am so happy that you have the life you want now. You finding L and getting married couldn't have been any better. I wish all good things for you Angel Baby. All my love, your proud Moma