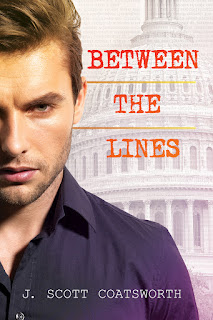 Thanks for welcoming me to your blog. I'm doing the rounds for a new release that's coming out tomorrow from Dreamspinner – "Between the Lines" – my mm romance meets political thriller meets mind-reading magical realism tale set in my current hometown of Sacramento.

I had a lot of fun writing this one. I was responding to a "call for submissions" from Dreamspinner for an anthology called "Random  Acts of Kindness."  I had this story opener I'd written some years before about this guy who goes into a curio store to find a gift for his girlfriend (yeah, I was waaaay less gay back then). It was only a couple scenes, and I thought that with a little work, it could make a pretty decent Random Acts story.

So I dusted it off, and decided to set it here in Sacramento. By that time I'd written a number of other stories, some set in places I knew (San Francisco, Portland, Seattle) and some in places I was mostly or totally unfamiliar with (London, New York) – thank God for Apple maps and the internet!

But I know Sacramento. Like practically carnally. So I set off to finish the story.

For anyone not familiar with Sacramento, it's a political town. When the legislators are here, it's pretty packed; On the weekends it really empties out. So I decided to put my characters in the heart of the action – in the Capitol Building. One, Brad, works as a Chief of Staff to a state Senator, and the other one, Same,  is an intern in the same office.

I pounded out the story, and wrapped it up by the deadline. It was told from Brad's point of view, and it was fun to see the city through his eyes. I included a number of real places in Sacramento, as well as some imagined ones.

And then I sent it off.

The deadline came and went, and then, after a few more weeks, I got an email.

As an author, you know that sad feeling that comes over you when someone rejects your work. It's like they killed your puppy.

But as I read a little further, I was surprised, then pleased, then dancing in our living room. My husband Mark asked what was up, and I told him – they wanted me to extend my 7,500 word short story into a novella and to resubmit it as a stand-alone piece.

So I did. It took me a couple weeks. The obvious thing to do was to flesh out my second character, Sam – he took on a clear personality and back story, and I really think his part brings something warm and grounded to the story that was missing before.

And finally, as of tomorrow, the first book will be released with just my name on the cover.

Brad Weston’s life seems perfect. He’s GQ handsome, the Chief of Staff for a Republican California State Senator, and enjoys the power and the promise of a bright future. And he’s in a comfortable relationship with his boyfriend of six years, Alex.

Sam Fuller is Brad’s young, blond, blue-eyed intern, fresh out of college, running from a bad break-up, and questioning his choices and his new life in politics. To make things worse, Sam also has a thing for the boss, but Brad is already taken.

While looking for a gift for his boyfriend, Brad wanders into a curiosity shop and becomes fascinated by an old wooden medallion. Brad's not a superstitious man, but when he takes out the medallion in his office, he sees the world in a new light. And nothing will ever be the same.

It began with a medallion.

The piece was a simple wooden disk, hand carved with the shapes of leaves and forest boughs and polished by centuries of use, giving it a patina of great age.

It sat upon a small green velvet pillow—the kind jewelers sometimes use, rather unsuccessfully, to enhance a plain necklace of false pearls. The kind you might expect to find on your grandmother’s settee, in a slightly larger size, embroidered with “Home Sweet Home.”

Yet there was something compulsive about it—something hidden in the dark crevices of the carving, filled with the dust of ages.

At least that’s what Brad would recall years later, when he thought back on the first time he saw it: the moment when the lines of his mundane life suddenly snarled, snapped, and ultimately recombined into something quite different.

Of course, he didn’t know any of this at the time.

OOOh this looks really good and I LOVE your story of how it came about! Thanks for sharing it :D