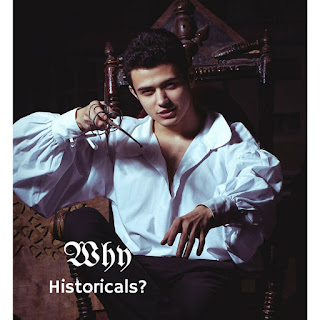 Hey y'all! Julia Talbot here, hijacking the wife's blog to talk about historical romance in m/m.

I couldn't be more tickled to see historical romance making a comeback in the world of m/m. Thanks to authors like KJ Charles and Ava March, the genre is getting a breath of fresh air, and I love it, because I loved to read historical romance. I cut my teeth in Kathleen Woodewiss and Johanna Lindsay, and I want MORE!

Romance is just like TV or movies. Popularity wanes, then returns. I knew historicals would make a triumphant return when TV began putting out shows like Salem and Sleepy Hollow and Penny Dreadful. Sure, they're paranormal, too, but they all had elements of the costume drama.

My history with writing historicals is a little more turbulent than reading them. When I first started in gay romance, readers would devour anything. There was no competition to speak of, and I blissfully wrote the kind of historical romance I imagined Karen Robards would if she was writing gay. Heavy on costume and light on history. At the time, there was a small, but very vocal group of reviewers who only read and wrote historical gay fiction, light on the romance, and well, they tore me a new asshole.

Licking my wounds, I moved on to paranormal and contemporary, and didn't look back, because I never wanted to go through that kind of trauma again, LOL.

Now I feel like new breath has been given to gay historical romance. People are reading and writing the kinds of books I love, and it's time for me to bust out and do some more yummy historical books.

With that in mind, I've brushed up, added 2000 words, and re-released an older gem of mine, a book called A Gentleman of Substance. I did add some more historical detail, but I concentrated on the relationship, and I couldn't be pleased. 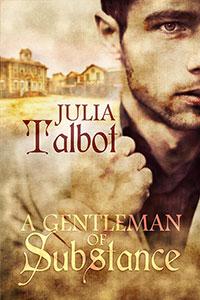 And you can find the book in paperback and ebook on Amazon or in ebook on All Romance Ebooks here!

And here's the blurb to get you going!

Michael St. James hates tidewater post-Colonial Virginia with a passion. Banished there thanks to an ill-timed duel, Michael is bored with the countryside, and thinks his new companions are poorly-educated boors. What he needs is a challenge, something to stimulate his mind. Which is why, when Michael meets Daniel Calhoun, he takes such an immediate interest.

Daniel Calhoun is a gentleman farmer who has no time for the social niceties demanded by a man of his station any more than he has patience for changing fashion or politics. When he sees Michael St. James, Daniel sees a man with no substance, and he’s certainly not interested in becoming friends, or more, with the irritating man. There’s more to Michael than meets the eye, as Daniel soon discovers, and the two embark on a scorching affair that might just be the ruin of both of them. Can they find a way to be together, or will Daniel and Michael be forced to hide what they feel?

This title was previously published under the same title. 2000 words have been added to the text for the second edition.
Thanks for letting me play!