Werewolves, Julia, Laughing and Having a Ball 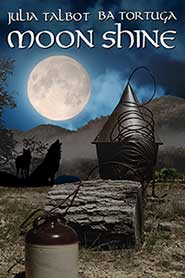 Moon Shine is out today. :D

Julia and I had so much fun co-writing the Cereus stories that we got to brainstorming and, suddenly, we had a ridge runner turned werewolf that was in desperate need of another growly man to nibble on.

I had an absolute ball writing this one, but I'll admit straight up, I'm dying to write the sequel, Absinthe. I won't spoil anything, but once y'all read it, you'll know of what a speak.

Jenson expects all sorts of trouble being a moonshine runner, but he never thinks it will come from a werewolf bite. He’s dealing with all that while getting his next shipment ready, and he thinks he’s doing all right until David shows up.

Confused, scared, and hot as hell, David is just the kind of trouble Jenson doesn’t need, and everything he wants. Can he help David figure out who bit them both, and keep his life on track at the same time?

And here's an excerpt for you:

He smelled trouble about a half second before something landed on his back -- someone heavy and solid and hot. "Where is he?"

Jenson didn't stop to think. He just whirled, his arm pushing up under his attacker and sending the guy flying. Then he headed for his shotgun, which sat at the edge of the clearing. He was always careful not to mix gunpowder and sour mash.

His legs were taken out from under him, a lean, hawk-faced man with skin like leather staring down at him. "I don't want to hurt you. Where is he?"

"I don't want you to hurt me either." He kicked out with his right leg, sweeping the man off his feet.

The man landed with a hard thud, the solid little guy taking it well and rolling right up. It was impressive, and it told Jenson a lot. Like that the guy was not just a human.

"Please. You smell like him. Where can I find him? He did something to me."

"What do you mean I smell like him? Him who?" Jenson ducked to one side when the guy rushed him again.

The dude nodded, heavy braid swinging. "I just need to find out what the fuck he did to me."

Huffing out a breath, Jenson caught up with the whole situation. Then he went to sniff the guy a bit, moving as close as he could. Damn it all. "Bit you, did he?"

"Yes! Where is he? What did he give me?" Those near-black eyes were snapping, the fading sun reflected in them.

"It's called lycanthropy, man. You're a werewolf."

"Nonsense." The man snorted. "I'm not hungry all the time. The Wendigo are starving, constantly. Everyone knows that."

Well, okay then. He guessed that showed him. "Cool. You're not an ethnically specific breed. Go you."

"What?" He got the look -- the Jesus, you're an insane hillbilly aren't you look. Which, okay, there was a still. Woods. Shotgun.

But he didn't have on overalls and he had all his teeth, goddamn it. He wasn't in Arkansas, either. His last name wasn't Hatfield or McCoy. He knew what the hell he was talking about. "You know, werewolf. Full moon. Grr."

"No way. I can't be a hunting guide if I'm eating people. Where the fuck is he?"

"I. Don't. Know." That should be clear enough, right? Jenson turned on his heel. He was done with this shit.

"You smell like him! Why the fuck are you hiding him?"

Jenson ducked the next rush, whirling around and whacking the idiot in the chest.

"I'm not! He bit me more than a year ago. I can't possibly smell like him."

Huh. All the way up by the Cherokee forest. Bizarre. There was no way that asshole was here, not without Jenson scenting him on the wind. Right?

"You don't know where he is." The thin lips twisted. "Sorry for bothering you. My mistake." Then the man headed out, right back toward the trees.

Jenson was going to let him go. Was determined not to get involved. He had no wounded animal protective response. Which left him wondering why he turned around and went after the guy. "Wait. Maybe we can help each other."

"I don't know, no. But if his trail led here, he's been hunting my happy ass. I can help you find him." He had no idea if it was true. Jenson just wasn't letting this guy get away so easy.

"I have to. Something's wrong with me." No shit on that. The guy's wolf was crawling under the surface, just waiting for the moon.

"I can help you with that, too." He could. He'd done his moons, and he'd done more when he changed unexpectedly the first time someone tried to take his still down after he'd been bit.

Those dark eyes pierced him. "How? I keep dreaming shit."

"I know. I been there. I've been like this longer."

Jenson wasn't sure it worked that way. What if, when and if you could kill the wolf who made you, you wiped out his whole progeny or whatever you called it?

No way was Jenson ready to die.

He growled a little, surprised as hell when the man rumbled back. Oh, he didn't think so. Jenson swelled up like a big frog, knowing he could look damned huge when he let his wolf play a little. He advanced, hoping to hell the other guy backed down.

There was moment where he thought the guy would, then the dark eyes flashed gold and their chests slapped together.

Oh. Hello. Whatever he might smell like, the other guy's scent was all male, hot and musky and just his type. Down, boy.

Can't wait to see what y'all think of it!

Here's your buy link, and it's available on Amazon and ARe as well. :D

This sounds so good!! Adding it to my wishlist! lol..

Thanks so much. :D