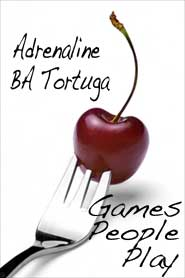 Big time country singer Travis Reed has impulse control issues. He's known for crazy stunts and good music, but someone has been making threats on his life, which his management thinks is a bit too much. They hire Wyatt Chastain as Travis' new personal security, a man who can keep Travis safe from his stalker, and from himself.

Travis doesn't think he needs a babysitter, but the attraction between him and Wyatt is white hot from the first. He's happy enough to play, and Wyatt has a few impulses of his own, but when things start to get crazy, they have to learn to trust each other as much as they want each other. Can they get their adrenaline rush in and keep Travis alive?

Singer songwriter Travis is an adrenaline junkie. He lives life in the fast lane. At least he does until his label hires Wyatt to keep an eye on him and keep him out of trouble after threats are made against Travis' life. Good thing Travis falls hard for Wyatt.

That's the premise of BA's latest. It's a scorching hot, fun romp. The sex is hot, the characters are fun and well-drawn, and the plot will keep you reading to find out just who the bad guy is. Not to mention, every time Wyatt called Travis his "Little Bit" it melted my heart.

I really enjoyed this one.

"T." Someone nudged him from his corner on the sofa. "T, there's a party in Tahoe, man."

Oh. Travis liked Tahoe. Liked it a lot. "We could all go to Mt. Rose, huh? Snowboard?"

It was early enough, there should still be snow.

There was nothing sexier than a naked guy with a Stetson in a hot tub.

"I'm in. Don't tell Saul or Donnie. They'll get all tense about making that show in LA."

He'd make the show. Maybe not the rehearsal, but the show? He'd make.

"Cool. You want a guitar? You got four days. You'll want to write."

Man, Jeff knew all about him, huh? Too bad the man was seriously addicted to boobies. "You know it."

The bus finally pulled in at the diesel stop -- a Loves or something -- and he and Jeff were just about ready to jump ship when the damned door hissed open, and not to let them out to buy souvenirs and go potty.

Nope, this was to let someone on. The guy was tall, broad, and dressed in jeans so old they were almost transparent, worn long over plain brown cowboy boots. A brown leather jacket and a winter Stetson completed the look.

Huh. Jeff's greasy head came in close. "Who's that?"

"Dunno. Doesn't matter, really, 'less he's a reporter." That would suck. Travis didn't like when the reporters got on the fucking bus. He had enough trouble with groupies.

Travis rolled up, headed right over. "Hey, there. I'm Travis. You are?"

"Huh?" Wyatt? Like in Earp? "You probably need to talk to the management types. We're just flunkies back here. Guitar bunnies."

Nobody important. Just guys fixin' to hop into a truck and head to the slopes. La la la.

"Oh, I talked to the management. That's why I'm here." The guy tilted his head, eyes the color of black coffee narrowing. "I thought you'd be taller, man."

LOLLL at that last line :D