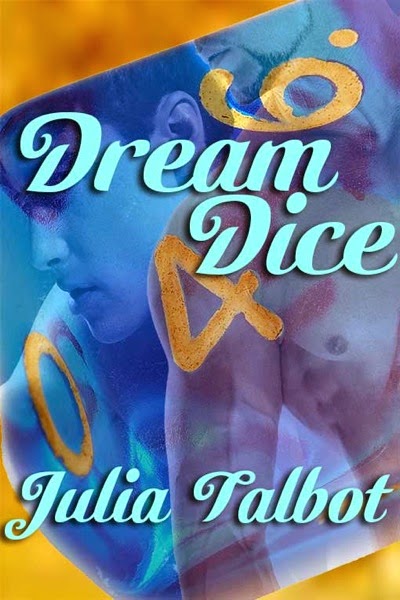 BA asked me to stop by and do a guest post about my new release at Torquere, titled Dream Dice. It’s out Wednesday, and it’s a fun, hot little tale about gamer geek Thayer and the magical dice he buys at a con.

I have a confession to make, y’all. I am a gamer geek. These days I’m mostly reformed. I have not bought a new book since the 5th edition of Call of Cthulhu. Honestly, writing takes care of most of my storytelling needs now, but I still have all my gear.

You see, I was not just a gamer. I was the game master. I have rule books. Supplement packs on things like combat and weapons. I have price guides to common clothing and equipment in the 1920s and Clan Guides to obscure vampire breeds. I own no fewer than five complete sets of dice, along with a dozen more sets of D100s I thought were pretty. I have a solid turquoise D3. I have storyteller screens for no less than four games. (CoC, Vampire, Mage, and Cyberpunk). I have binders full of old NPC sheets.

I made maps. I kid you not. I ran vampire hunter games set in the middle ages and made my player characters learn the various prayer times in the old Catholic tradition, AND made them stop when the prayer bells rang and recite them.

So, yeah, I think I was uniquely qualified to write a gamer geek like Thayer ;)

Anyway, I hope y’all will check out my Dream Dice!

When Thayer buys a new set of gaming dice at ComicCon, he has no idea they come with magic attached to them, or that they’ll transport him to a land where he’s a healer of the sexual kind. Barbarian Erlich needs just that kind of magick to pass some important trials, so he turns to Thayer for help. Magick never comes without a price, though. Can Thayer and Erlich pay what they owe and survive?

And here’s a wee excerpt for y’al!

“Those are your dream dice, and you know it.” The guy behind the table looked like a pirate: plumed hat, half cape, high boots. Thayer looked from him to the amazing bag of dice he held. They came in a black velvet bag, simple and unadorned, but of good quality. The dice needed no fancy packaging. They glowed under the harsh lights of the convention center, all turquoise and lapis, chrysoprase and malachite. The colors spoke of real semi-precious stones, not acrylic, the numbers etched in gold. There were four D10, or ten-sided dice, two D6, which looked like regular craps dice, and once each of a four-sided die and a twelve-sided one.

“They are lovely.” Thayer needed more dice like he needed a hole in the head. Still, while they might not qualify as dream dice, the set called to him, making him want to touch them where they spread across the felt rolling board. “How much?”

“One-fifty.” When Thayer turned away, the pirate guy caught his arm. “But for a serious collector like you I’ll go eighty.”

“Eighty?” That was a good deal. The last gem set he’d seen with the kind of rocks here had retailed for one thirty five.

“Yes. Just for you. Show special.”

“Do you take cards?” He had enough cash, but he really wanted to have enough for the food vendors.

“I do.” The guy whipped out a phone with a card reader attached.

“I’ll take them.” He pulled out his wallet, not at all sure why he thought this was a good idea. The vendor wasn’t even hard-selling. He didn’t need dice. These tugged at him, though, deep in his gut, making him want them.

He took the bag when the card went through, putting it in his pocket so he could feel the weight of them, the way they warmed from being close to his skin. He waved at the pirate dude and wandered on, but the rest of the booths didn’t interest him. The more costumed and corseted cosplayers he saw, the more he simply wanted to take his new dice home and roll up a character. That was the true test of new dice, what kind of cool cleric they would come up with.

Thayer did stop by the food booths and get a couple of deep-fried goodies: a corn dog, curly fries and a Snickers bar dipped in batter and cooked golden brown. After inhaling those, he headed home, ready to settle in for the night. He could always go back to the con tomorrow. He’d bought a weekend pass.

“Kenji?” His roommate should be out for the evening, but it never hurt to check. Kenji the Horndog had guys over all day and all night sometimes. Too bad Thayer didn’t have that kind of luck with men. Helped that Kenji looked like an anime character, he guessed.

No one answered, but Thayer checked Kenji’s room, anyway. The only thing he saw was an explosive mess of clothes and tangled sheets. No lean, tanned surfer, no big muscled jocks of the type said surfer liked to bring home.

He tossed a pizza in the oven because he was still hungry, grabbed his character sheets and his tablet, so he could write up his adventure, and lit some sage and pine candles. He liked candles, but compromised with Kenji on a more manly scent. Shit, why he did, he had no idea. Kenji could identify vanilla room spray from three different retailers, including Pier One and Bed Bath & Beyond. The man was such a queen, deep down. He was a good roommate, though, and had been a great surrogate for Thayer’s folks, lost three years ago to a boating accident.

Settling cross-legged in front of the coffee table, he got his pencils lined up, the regular graphite for fixed attributes, the colored pencils for anything he might experience up in. XP was vital to the kind of cleric he liked to play.

He gave the dice a couple of rolls across his velvet tablecloth. Yes. Those were some good numbers. Okay. A cleric. Not a Paladin this time. Thayer didn’t want to have to do that whole legal and righteous thing. Not a monk, either. That got boring. Ooh, maybe someone who healed with sex magick, since he was just running this one for himself. Dude, maybe he should write this up for the Nifty archive instead of trying to sell it to a gaming publisher.

For some reason, he ended up with physical characteristics very close to his own: black hair, gray eyes, five-nine-ish and not too buff. Okay, skinny. From there he let the dice give him exceptional charisma, dexterity and magical ability. He had good stamina, too, if no strength and not much wisdom. He never allowed himself less than average intelligence, though. Too many characters wound up dead from being beautiful but stupid.

When he had a complete character, one with major traits and minor psychoses, with attributes and skills aplenty, Thayer sat back and smiled, really pleased with how the dice performed. They had warmed to his hands, the numbers seeming to glow brighter every time he touched them. He reached out to stroke them, watching his fingers come in contact with each stone. “You just needed love, didn’t you?”

The gold imprints in the dice flashed bright, almost like lightning, the room starting to spin. Thayer gasped, his body shaking with the impact of the shock wave that seemed to come from the stones, and his eyes rolled back in his head. He got out one sharp cry before he slumped over to one side, the whole room going dark.

Find it at www.torquerebooks.com tomorrow!

Oooh love the excerpt. And WOW I did NOT know you were a gamer girl. Good for you :D