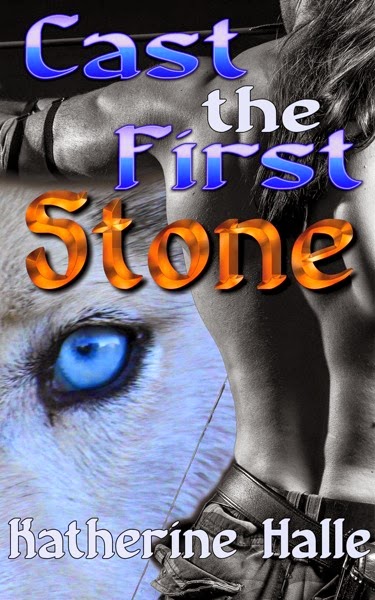 I’m tickled as all get out to welcome Katherine Halle, fantabulous lady and kick ass writer!

She agreed to answer some questions for me, so Heeeeeere’s Katherine!

1.  What’s the best part of writing a shifter?

So many possibilities. So many different shifters, so many different relations/communities. The possibilities are just endless – plus, shifters are hot, especially the animals that mate for life. And I have to admit, wolves are my favorite because of all the scent marking and the possessiveness and the claiming. Just YUM :D

2. Tell me why you’re the queen of happy endings?

Wow, that's a loaded question. It probably started back when Torchwood was on TV and I was heavily involved in the fandom and then the show killed off my favorite character. I was DEVASTATED. (In my defense, my hubs was on deployment at the time and I had a three year old at home & we were staying with my parents, my stress level was pretty high.) Ask Button, she knows. After that, I couldn't read things where the MCs either broke up or died, or their kids were in danger. I started private messaging authors to find out if everything was going to be okay – or having other people (Button) preread it for me. I even developed a rating system so people could label their fics! And believe it or not, people did! So I decided that in my writing, no matter how hard it got, how angsty, whatnot, there would always be a happy ending. Plus, the happy endings you have to work for – are that much happier.

3. What’s the hardest part of your writing process?

That point about halfway through when you've written too much to quit but you just don't quite know how to get to the end. I usually stall out there and some things get shelved for quite a while. And also, that's about the time I start thinking that what I have written is crap LOL.

4. Tell us about your writing space?

Right now I write at my kitchen table, it overlooks part of our back porch which looks right out onto a canal. Sometimes, if the weather is nice, I'll sit out on the back porch. But mostly it's inside. When I have to think, or take a break, I just look up and stare at the water for a while – or pet my dog.

5. Cast the First Stone — where did the title come from?

Hmm, that's tricky without giving too much away – but I honestly had the whole "People in glass houses shouldn't throw stones" and also "He who has no sin shall cast the first stone" in mind, plus it's one of the character's names. But it definitely played on the theme that nobody is perfect and nobody is in any position to judge anyone else. And this comes into play in the story when Julian finds out something he didn't expect and it changes his entire perspective.

6. What are you working on now?

I'm actually (actively) working on two things – a sequel to my first short story ever A Watched Demon Always Boils, something novel length, hopefully angsty and delicious. And something brand new, Tom is now father to his two nieces due to the death of his sister and ends up falling for his niece's third grade teacher – who has his own issues to deal with. (And a whole slew of other starts…but those are all on the back burner so I can concentrate on these two)

8. Favorite television show of all time?

10. Tell us something about you that would surprise us.

I converted to Catholicism (from Protestant) about 14 months after my son's birth. I did a ton of research on my own, made sure that the basic beliefs were what I believed and took the plunge. There are still many things I do not agree with the church on, SO MANY THINGS, but in the end, my faith and beliefs are between God and me, I don't need the church for that.

Official Blurb: On the trail of a rogue werewolf, hunter Julian Hart takes on more than he can handle when he meets up with Alpha Stone. His hunt uncovers secrets within lies and a plot for vengeance no one saw coming. When the smoke clears, what Julian finds at the end of the trail will forever change his life and the lives of everyone he holds dear.

Excerpt: "I took the liberty of moving your stuff from the motel. I had it put into one of my guestrooms. You'll stay here tonight."

"Now wait just a damn minute." I could feel the anger whirling inside me. How dare he move my things without my permission? I didn't want to stay here in his house. The sole human amidst a pack of wolves. Literally.

In a flash, he had me pinned to the wall, his arm across my throat. Just as fast, I had my knife out and pressed against his side. He laughed, the rich sound washing over me, sending my blood places I didn't want it to go. "Touché." The pressure on my throat loosened minutely. "Seems we are at an impasse. I want you here. I can't keep you safe at the motel. There are some in my territory that don't take too kindly to hunters."

"Yes, like Eve. I can't control every single werewolf activity that happens. There will always be someone that makes a bad choice, despite my orders that you are offlimits.I would hate to have to punish someone after the fact. I'd rather just prevent it from happening in the first place."

"Who says I would be safe under your roof?" I met his blue eyes defiantly, pressing the knife into his side enough to slice through the fabric of his shirt. He hissed as the blade laced with wolfsbane bit into his skin. I felt a momentary pang of regret, but it vanished when he pushed closer, nosing at the pulse in my neck.

"I can smell your excitement," he breathed out, his lips moving over my skin.

I pushed against him. "Can you smell my anger?" I snarled.

Another dark chuckle washed over my skin. "Yes, and it smells delicious. Now, are we done? You're not going back to that fleabag motel."

You can find Cast The First Stone here:  - http://www.torquerebooks.com/index.php?main_page=product_info&cPath=78_85&products_id=4276

Katherine Halle is known as the “Queen of Happy Endings.” She firmly believes that no matter what the obstacles, what the struggles, or how much angst is involved in the journey, that the ending should always be a happy one.

Katherine’s love of the written word started at a very early age with repeated demands of “read to me” to any who would listen. It was only natural that writing would follow. As a child, she could often be found daydreaming, thinking up fanciful stories and writing them down. Now she does it on a laptop. Much faster.

Katherine’s favorite animal is her dog. She likes books, movies, and quirky television shows, such as Buffy the Vampire Slayer and Hart of Dixie. She loves cooking and watching cooking shows. She has lived in both Europe and the United States and loved both. When she’s not writing or plotting, Katherine enjoys spending her time listening to music, reading books written by other people, and being with her family.

You can find Katherine on:

Thank you so much for having me! This was a lot of fun :D

Hee! I remember that rating system well. Before Torchwood you were still more of a happy endings person but the angst was okay too. But then again, given that BSG was pretty much nothing BUT angst ... did you really have a choice? *lol*

I agree about the happy endings you have to work for. So much more enjoyable. :)

I am available for pre-reading angsty fic any time! :)

Thanks Tracy for stopping by, and yes, the ratings system. Yeah, weird, BSG - the angst was so good, but not devastating.

And YES - HEAs you have to work for are EXCELLENT :D

Button - Good to know :D And thank you *HUGS*