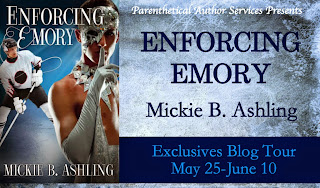 I’d like to thank BA Tortuga for the opportunity to appear on her blog to share an exclusive excerpt of my latest release Enforcing Emory. This novel is set in a new universe—Olympic figure skating and hockey—so no catching up necessary. There’s an opportunity to win a free e-copy of the novel or a gift certificate by entering contact information in the Rafflecopter. Enjoy!

Nik’s rage carried over to the next day, and he was penalized several times for body checking, high sticking, and holding. Fueled by the pain radiating off his bruised ribs, he patrolled the ice with a vengeance, and anyone who got close to stopping Cory or messing with Jake got nailed. He ended up in a major smackdown against the boards when someone tried to cheap-shot Jake. He spent five minutes in the penalty box, but Jake was safe, and that’s what mattered the most.

Nik hurt all over, but the worst pain was the one in his ribs where Igor had battered him with the knitting box. He was sure one of them was cracked; he’d placed extra tape before the game, but now that it was over and he was laid bare, he saw a bright blossom of black and blue was radiating down his torso.

“Motherfucking prick,” he murmured, looking down at himself.

“It’s all good,” Nik said, throwing on a T-shirt to cover up the ugly evidence of his father’s insanity. “I was just doing my job.”

“Dude, you were on fire tonight.”

“I have a toothache,” Nik said, fishing for an excuse. “Hurts like hell and it’s making me cranky.”

“Worked in our favor. Did you hear the cheers when you clobbered the Toronto D?”

“Huh?” Nik was oblivious to that part.

“Your family was up in the crowd screeching the loudest.”

“How do you know they were my family?”

“They had fucking signs, man.”

“There was a guy with a bunch of chicks.”

“Must have been him.”

“We had a fight last night.”

“’Rents suck when you least expect it, and then turn around and do something over-the-top cool like that banner.” 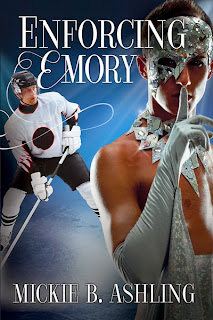 Olympic figure skater Emory Lowe falls in lust the moment he lays eyes on his new neighbor, hockey player Nikolai (Nik) Vetrov. On the surface, Nik is a typical badass enforcer, intimidating and dangerous, on and off the ice. The only son of Ukrainian immigrants, Nik has been groomed from childhood to fulfill his father’s dreams of seeing him in the Hockey Hall of Fame. Igor guides his son toward that goal with a controlling—and abusive—hand, steering him clear of anyone who might ruin his chances.

Although Emory is the US National Figure Skating champion, he’s in-your-face gay, and his audacious persona rubs Nik and his family the wrong way. Raised by supportive and loving parents, Emory is Nik’s polar opposite in every way but one—his desire to succeed. Underneath the fluff and glitter beats the heart of a fierce competitor, and this side of Emory’s personality begins to close the distance between the two athletes.

While the attraction was one-sided in the beginning, Nik finds himself responding to Emory’s flirting. Before the incongruous pair have a chance at any sort of relationship, they must survive the pressures of career, separation, and most importantly, Igor’s ruthless homophobia.

Mickie B. Ashling is the alter-ego of a multifaceted woman raised by a single mother who preferred reading over other forms of entertainment. She found a kindred spirit in her oldest child and encouraged her with a steady supply of dog-eared paperbacks. Romance was the preferred genre, and historical romances topped her favorites list.

By the time Mickie discovered her own talent for writing, real life had intruded, and the business of earning a living and raising four sons took priority. With the advent of e-publishing and the inevitable emptying nest, dreams were resurrected, and the storyteller was reborn.

She stumbled into the world of men who love men in 2002 and continues to draw inspiration from their ongoing struggle to find equality and happiness in this oftentimes skewed and intolerant world. Her award-winning novels have been called "gut wrenching, daring, and thought provoking." She admits to being an angst queen and making her men work damn hard for their happy endings.
Mickie loves to travel and has lived in the Philippines, Spain, and the Middle East but currently resides in a suburb outside Chicago.

Using Rafflecopter below, enter to win one of these prizes (contest open internationally): a $20 Dreamspinner gift certificate, one of five ecopies of Enforcing Emory, or an audio copy of Fire Horse. Must be 18 or older to enter.

Tour and materials organized by PAS Promotions
Posted by BA Tortuga at 8:29 AM

I enjoyed the excerpt, I know that Hockey can be a very physical game and thank goodness for all the padding they wear.

Another interesting excerpt - thank you. I am enjoying the tour and developing and intense dislike for Igor.

I am loving these different excerpts. Thank you. And thanks for the giveaway

I'm loving all the excerpts. I hope that he can get away from his father. Thank you for the tour, excerpts, and giveaway chance!

Loving the excerpts. Thank you for sharing it =)

Oooh what an intriguing excerpt! Thanks so much for sharing it!

I love the excerpt! Congratulations on the new release! Looking forward to reading it!

I've always wondered exactly what players notice in the stands!

My son has played hockey since he was 12, it can be that brutal. And yet if you understand the game you see the beauty in the flow and set plays of the game.

I couldn't wait any more! I purchased the book and read it all! I loved it! Thank you!

Nik's dad is certifiable. Another great teaser excerpt. Thanks for sharing.