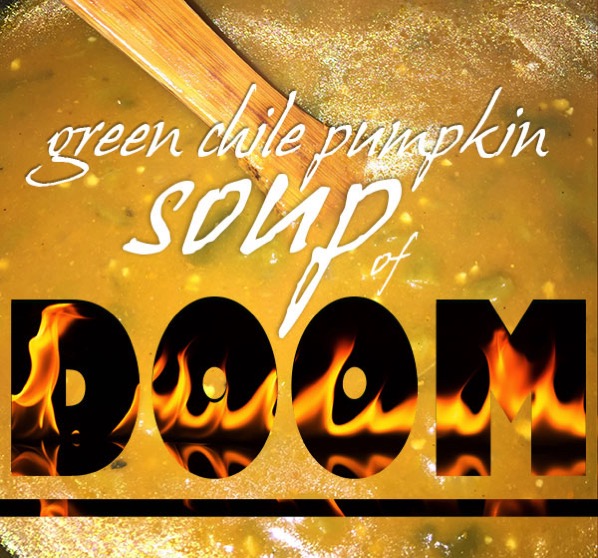 Yes, well. It tastes amazing, assuming you are like me and have a gut of pure cast iron.

OMG, y’all, this stuff is like burning fiery death to rival the hot pickled brussels sprouts or the spicy chickpeas of tears.

Someone was brave enough to ask for the recipe, and never let it be said I’m unwilling to share the pain, so here goes.

1, 2, 3, 4 or possibly 5 cans of pureed pumpkin, depending on your tastes and whether or not you want to shit fire for a month.

Some olive oil. Like a little bit because I’m on the don’t have a stroke diet. If you’re not, use butter. It’s just for the onions.

A dollop of chopped garlic. Again, the amount is going to depend on whether or not you intend to kiss anyone for, oh, a day or a month.

Hatch green chiles, roasted, seeded and chopped. I used 8. 8 is the amount involved to add all the cans of pumpkin in the house (2) and have the wife try it and say, "with enough sour cream you might not die”. YMMV. If you’re not lucky enough to live where green chile is plentiful and they shoot you in the face if you don’t like it, start with 2 cans of the canned stuff.

Salt — if you find yourself crying after the first testing bite, lean over the pot.

Test often. Unlike me, this bitch gets hotter with time.

A can of evaporated milk. Again, friggin’ don’t have a stroke diet. If I were less scared of blowing an artery, my happy ass would use cream.

Chop your onion and garlic and sweat it in oil, butter, the tears of a dozen angels (your food lube of choice).

Add pumpkin, chiles and some salt. I like to put this in a Crockpot on low in order to torture the dogs with a yummy smell that they won’t want to actually eat. You can totally do it on the stove.

When you’re close to eating, add the cream/sour cream/evaporated milk according to your heart health.

If you’re my wife, add some more sour cream and a loaf of bread to eat it with, and/or croutons. A crispy crouton would be nice drowning in a lake of fire.

Let me know if anyone’s brave enough to try it!

This looks YUMMY!!!! We loved Pumpkin Cream soup when we lived in Germany. I've tried some now that we're back here and they are just BLAND BLAND BLAND /o\ this might be just the thing we need!

I may have to tone the spiciness down though because the kid and the hubs aren't so big on the spicy LOL.