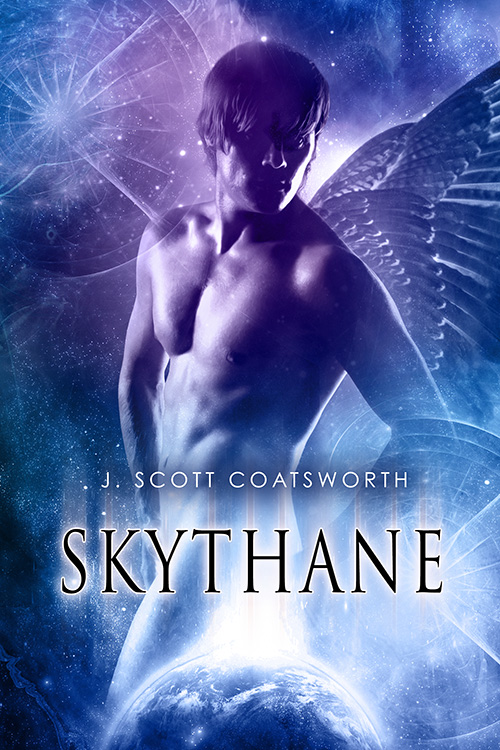 Thanks for having me to celebrate the release of my first novel, “Skythane.” :) Here are my answers.

Are you a plotter or a pantster?

I used to be a total pantser. I started so many stories, because it was such a thrill to set off o a new one. But I hardly ever finished them.

Fast forward to now, and I’m a controlled pantser. I take the time to figure out where to start and where to end, and generally how I’m gonna get there. I leave enough fuzziness to wander and keep the story interesting for my writer brain. :)

As a child, what did you want to be when you grew up?

LOL… three things. Well, four, actually. Writer, astronomer, astronaut and rock star. The astronomy thing had way too much math. The astronaut thing too much physical exercise. And the rock star thing… let’s just say that never panned out. Might have helped if I’d actually tried, but the music thing never came easy for me.

So that left writing, which it turned out I was pretty good at.

Did you start out in (online or real life) crit groups?

Yeah, kind of. When I was in my early twenties, I took a writing class at my local community college. The class ended, but the group continued on, and for several years we had a wonderful, vibrant writing community. I still miss it at times, but it helped affirm my love of writing.

Do you ever get writers’ block?

I do, kinda. I don’t know that I am ever completely blocked, but I do run into dead ends sometimes.  Usually it means there’s a part of the story my subconscious is working on. So I like to have two or three projects going at any given time, so when I get what I call “writer’s slowdown”, I can switch lanes and move ahead on another one until my brain figures out what’s wrong with the first.

Do you have any strange writing habits or superstitions?

Hmmmm… not really? I do have certain things at my desk that help inspire me… my little Marvin the Martian flash drive, my Buddah Board (you paint on it with water) and the cool magnetic hourglass Mark got me for our anniversary. They help distract my brain when I get stuck or stressed.

And music. Music keys into my creative impulse, so it helps me write, especially when I find the right song for a scene.

——————
My new novel, Skythane, is just out – and it combines my love of sci fi and secret reveals and MM romance. I hope you enjoy it!

Jameson Havercamp, a psych from a conservative religious colony, has come to Oberon—unique among the Common Worlds—in search of a rare substance called pith. He’s guided through the wilds on his quest by Xander Kinnison, a handsome, cocky wing man with a troubled past.

Neither knows that Oberon is facing imminent destruction. Even as the world starts to fall apart around them, they have no idea what’s coming—or the bond that will develop between them as they race to avert a cataclysm.

Together, they will journey to uncover the secrets of this strange and singular world, even as it takes them beyond the bounds of reality itself to discover what truly binds them together.

Rain hit the plas and ran downward in little rivulets, separating and rejoining like branches of time as the storm whipped itself into a frenzy over Oberon City.

Xander Kinnson lay on his bed, head thrown back, watching the tempest with a laziness that belied his inner turmoil and pain. Alix had left him and gone missing. A year had passed, and still he had a hard time accepting that simple fact.

His dark wings with their jet-black feathers were stretched out lazily to each side of his supine form, their tips extending past the edge of the bed. His chest heaved slowly up and down, and he breathed easily, as if he were utterly relaxed.

Nothing could have been further from the truth. Below the surface, under the deception of skin and sinew, his heart beat at a thunderous pace, and his mind raced for answers to Alix’s fate that slipped beyond his grasp.

The handsome trick he’d brought home rested his warm hands on Xander’s thighs, his hot mouth engaged elsewhere. Xander smelled the deep, masculine musk of him, slipping a hand absently through the man’s dark, tousled hair as the rain increased to a thundering downpour against the plas. The drops glistened, each an individual universe of shimmering light before running quickly out of sight.

A flash of lightning illuminated the room, thunder indicating how close it had been. As the heavy rain pounded against the arco’s walls, Xander rode the wave of pleasure higher and higher. Despite himself, he rose quickly toward climax, drawn up on the tide as the trick worked his cock. Unable to stop himself, he thrust his hips almost angrily upward into the man’s willing throat. Closer, closer….

He reached the crest, a pleasure so intense it burned through him like phosphorous, a white-hot fire.

Lightning flared again across the wet, black sky, followed by thunder so close it shook the bed. The storm had reached a fever pitch outside, and he arched his back in the air one more time, his wings rustling beneath him. As if in concert with the storm, Xander came, the release of his orgasm radiating from his hips along his spinal cord and down through his toes and the tips of his wings.

The rush of elation washed away his cares for a few brief moments. Xander shuddered, shivered, and shuddered again, and it was over.

For a while, he drifted in an oblivion that was blessed in its emptiness. The rain fell in a steady beat against the window, and he forgot to wallow in his pain. His mind floated free, with no responsibilities, nothing to worry about for those brief moments between sex and real life. This was what he needed. This lack of thought, this pleasurable oblivion where he could just be.

When he opened his eyes at last, the nameless trick was staring down at him, expectant.

“I can do more, if you’d like,” the man said with a grin. Like Alix, he had no wings—a lander man.

Xander glared at him, annoyed. He was handsome enough, tall, dark-haired, with blue eyes and a light complexion. Strangely, he reminded Xander of Alix. The hair and eyes were wrong, but there was something about him, and that annoyed the hell out of Xander, for reasons he didn’t care to examine too closely. “Get out,” he said with a dismissive wave.

The man frowned. “I thought—”

“Oh right, your pay.” Xander took the man’s arm and slitted him a hundred crits from the wrist reader embedded in his own. Then he waved the trick away. “We’re square. Now get the fuck out of my flat.”

The man gathered his own clothes, but Xander didn’t give him time to put them on. Instead he hustled the trick out of the irising door, palming it closed on his hurt and angry expression.

I really have become a bastard, he thought, staring at his dim reflection in the shiny black door. It had been a long year.

He tapped the cirq in his temple with his left hand, and called out to his PA. “Ravi, any messages for me?”

Over the ensuing years, he came back to it periodically, but it never stuck. Then one day, he was complaining to Mark, his husband, early last year about how he had been derailed yet again by the death of a family member, and Mark said to him "the only one stopping you from writing is you."

Since then, Scott has gone back to writing in a big way. He has sold more than a dozen short stories - some new, some that he had started years before. He is currently working on two sci fi trilogies, and also runs the Queer Sci Fi (http://www.queerscifi.com) site, a group for readers and writers of gay sci fi, fantasy, and paranormal fiction.