Morning, y'all! The best part about having another writer as your partner? Well, really it's being able to talk to the voices in your head without her thinking you're insane, but the other good part is knowing you can nudge them for a guest blog. :D

Here's my girl. Be good to her. 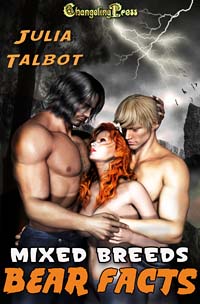 I always wanted to name a story that. Seriously.

I was never sure if I should, though, as it seemed too lighthearted for a shifter story.

Then Jeanette, Neale and Zane came along.

Jeanette is a werewolf newly without a pack. She doesn’t need those guys deciding her life for her. Of course, when she gets injured on a lone jog, she wishes she had some help. Along comes snow-bunny and were-kitty Neale, who knows just what to do with such a pretty damsel in distress. Take her to his werebear lover, Zane, who also happens to be a medic.

I had the best time with this book matching personalities to the animals involved. Jeanette is like a wolf, ready to throw down and defend herself. Neale is like a kitty on catnip, chasing everyone’s tail. And Zane is a big, cuddly teddy bear.

Man, I didn’t think I could write werebears, but Zane changed my mind! He’s a simple kind of guy, and ready to sleep all winter, but I love how kind he is.

Jeanette might be my favorite heroine yet. She has spunk, and she’s funny. I love humor in a story, and she gives it!

Here’s a bit of story just to get you going!

She turned a hairpin curve in the path and cried out when the earth slid out from under her feet, gravel sliding, sending her slipping down the slope a ways. One of her feet smacked into a rock and turned, rolling hard with a snap that she actually heard a split second before the jolt of pain shot up her leg. “Fuck!”

When she came to a stop, her head pointed downhill, her broken whatever pointed up, and she lay like a turtle on her back, the world slowing from a sickening spin. She sucked in a sobbing breath, telling herself she was not going to cry. Not. She had her phone, she had a bottle of water. The trail wasn’t busy, but it wasn’t deserted, either. Help wasn’t beyond reach.

Oh. Unless she was hallucinating the pretty blond guy appearing over the ridge, help was right here.

“No. God, no. I need help.” She nodded, reaching out instinctively.

“I saw you disappear right off the trail.” The man came pelting over, his trail runners slamming on the dirt. “Crap. I think you broke your ankle.” He helped her right herself, her leg screaming the whole time.

“Uh-huh.” She was covered in a cold sweat, just shaking, nausea in her throat.

“Your phone getting any signal? Mine is dead, and I can get you back to my Bronco, but we might want to call 911.”

He tilted his head, nose working hard. “Oh, man. I was running hard and so freaked I didn’t notice ’til now… How fast do you heal?”

“Fast enough to only have to take the rest of the week off work.” She tilted her head, sniffing. Oh, not one of her kind, but pretty, and not wholly human himself.

“Well, that’s cool, I guess. I have to lick things a lot more…” His cheeks went red-hot, and he grinned at her. “Didn’t mean that quite like it sounded. Here, grab my neck.”

Jeanette couldn’t help her chuckle, but she did reach up, arms wrapping around his neck. “There’s something to be said for licking.” He lifted her with an ease that belied his relatively short, lean frame, and he was gentle about it, which she appreciated. Her ankle throbbed in time with every step he took. “I can’t believe I was so stupid. I’m so lucky you saw me.”

“Hey, I’m the lucky one. A pretty lady I get to play hero with, and one I don’t have to lie about what I am, to boot? How awesome is that?” His Bronco appeared in her line of sight, and he held her up with one arm while he opened the back.

“Thank you.” She eased her shoe off, sucking in a soft, pained breath. Oh, man. That hurt. Like really.

“No problem. That’s pretty swollen. Let me see if there’s any ice in my cooler.”

“Hey, shit happens.” He rummaged around in the back seat before coming back with ice, his pretty gold eyes full of concern. “I know someone who could look at this for you. He’s medic certified. Does search and rescue.”

“Jeanette.” She touched his hand, the connection between them sudden, sharp. Electric.

His eyes widened, going dark bronze. “Wow. That was cool.”

He cleared his throat. “Well. Medic. Here we go.” He picked her up again and hauled her to the front seat.

You can buy it here! http://changelingpress.com/product.php?&upt=book&ubid=1824

Thanks for stopping by, y’all. Hope you check out the Bear Facts

OH this looks really good - and YAY for coming over here and 'hijacking' BA's blog :D