Instinctive Harmony was a challenge piece involving were dogs.

Blame Julia, I do. Still, I had a ball writing it and Connor still makes me want to snuggle the hell out of him. 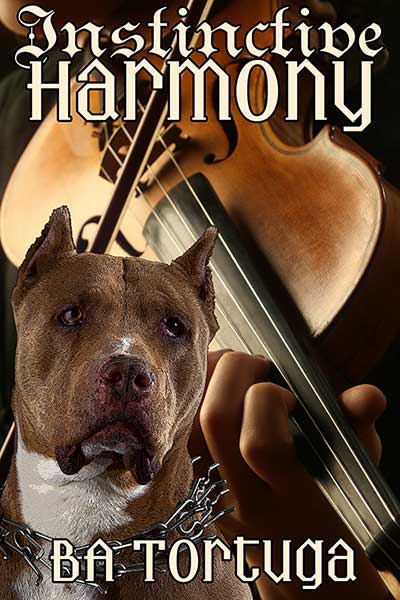 Connor arrived in the United States the way countless other Irishmen had over the last century. On a boat.

Luckily for him, the freighter he was on paid well for unskilled labor, and he had a handful of the unfamiliar paper money in his pocket as he wandered into the city. Baltimore had seemed like it would be smaller than Boston or New York, but it looked huge to Connor, who had rarely even been let out of his cage long enough to see a tree or some grass.

The noise...the noise was like the pit on the busiest fight of the year. It made him wince, made him hunch down in his sweater and peacoat, his watch cap pulled low over his eyes, hiding his scarred face in the dark.

People paid him no mind, for which he was grateful, but he still had no idea where he would lay his head this night, or how to put food in his rumbling belly.

The pubs were scattered along the street, some bright and busy, others dim, people slinking in and out, smelling of ale and grease and flesh. The further he walked, the fewer dim taverns he saw and the more bright lights poured out on the street.

People were coming and going, laughing, giddy with food and drink and the hope of fucking and...

Damn it straight to Hell!

A door swung open, nearly catching him right in the face, rocking him back on his heels. A tall, lanky bastard hurried out, dark hair flying, something in his hand, completely ignoring him.

A growl rose in Connor's chest and he took a step forward without even thinking, his hands clenching and unclenching as he invaded the man's space.

"Oh. Oh, shit. Man, I'm sorry. I tripped on the stairs and hit the door going ninety to nothing. I didn't hit you, did I?" He got a visual of long arms and legs and huge dark eyes, long coat fluttering like a dying bird.

The voice seemed too quiet for the loud street. Too gentle. Connor didn't think he'd ever heard the like of it. "No. No, you didn't. Sorry."

"Oh, good. I hit that crooked stair and whoosh. Too long legs and too short stairs." He got a quick grin, a wink, a nod.

Connor backed up two steps, staring at the man's face. A wink. Well, that was... Huh. He shook his head like he'd been hit. The little nuances of human kindness still escaped him.

Connor arrives in Baltimore with little more than the clothes on his back and the scars on his skin. Compared to where he's been the last few years, the city seems loud, busy, and almost frightening. Literally bumping into violinist Adrian gives Connor a new lease on life, though, and the immediate connection they forms helps him learn to trust again, a difficult feat for a shapeshifter who's been used and abused. When Connor's former owner shows up, though, it could ruin everything. Can Adrian deal with the truth?

Available at Torquere Press and All Romance Ebooks.