Hammer and Tongs is Out! 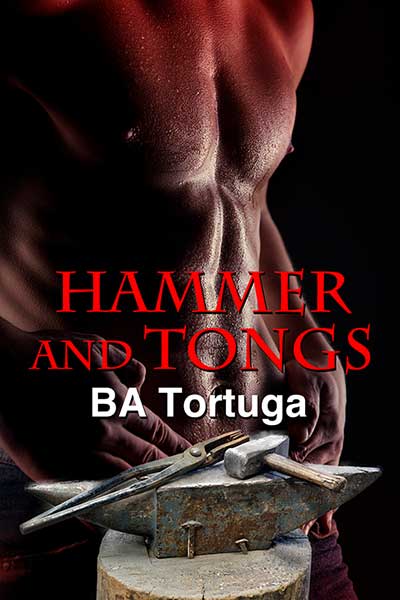 So, Julia and I were joking around about hideous euphemisms. You know -- making the camel with two backs, riding the screaming wonder wall, going at it like fuck-starved jackrabbits -- and going at it hammer and tongs came up.

Oh, I haven't written a historical in a while...

Then Virgil and Asa showed. Then Tak and Loko showed.

That's when I knew the boys had taken over. ;-)

Virgil is in trouble when he flees to the badlands of New Mexico, and he’s pretty sure the desert is going to kill him before the posse does. He’s running from his past, from a forbidden love. What he finds is half Native-American blacksmith Asa, who happens to be the stuff of dreams.

You can buy it now at Torquere Press, or later today at ARe and Amazon.

The mules were getting downright lazy, as hot as it was, not even bothering to brush the flies away from their ears. Asa flicked the reins at them, not wanting to move them too fast, but needing to get back to the smithy before dark.

Folks down in Mesilla thought he was downright crazy, living as far out in the badlands as he did. He smiled a little, thinking on how he liked being that crazy, half-Injun feller. Meant he didn't have to socialize, didn't have to put up with none of the whispers and the sideways glances at his long braid, his skin that was the color of well-tanned leather.

He could just stare those gossiping fools down and take their money. Hell, the devil himself knew they had their share of blacksmiths around between Mesilla and El Paso, but folks far and wide came to him for wheel rims and nails and horseshoes and andirons and all other manner of shit because he was the best at what he did. His work held up, and he never tried to cheat the iron of the charcoal.

He squinted out from under his hat, his mouth pursing up when he saw three buzzards circling just over the rise. He hoped to hell if something was dead, it wasn't right on the trail.

Dot and Sam, they didn't like dead critters, not at all. Made 'em all... tetchy. God knew a fractious mule was worse than a whole town full of self-righteous church-goers hunting the red man. The wagon topped the tiny hill, lurching up out of the depressions of hundreds of wheels.

The mules stopped dead, the back wheels still down in the ruts. Their ears flicked back and forth as Asa peered over them. Huh, Not dead. Neither the man, nor the horse. 'Course, both of them were down, which just wasn't good.

Hopping down from the wagon, Asa set the brake and wandered over, steps talking, crunching on the creosote. He nudged the man with the toe of his boot, then turned to the horse. That could at least be worth some work. If he got the little mare up, Asa could tie him to the back of the wagon, give him a little water. That was all he needed, it looked like. Someone had been unprepared for the badlands.

"Well, shit." Asa was startled into actually talking out loud, which seemed odd these days. "Guess now I got to take you, too."

He sighed, rolled his eyes. The horse first -- water and get him moving. Asa got the mules moving, enough that the wagon cast its shade over the man, keep the sun off. Then he went for the poor nag, who looked like his rider had pulled him down when the man fell off.

He clicked at the horse, tugging at the bridle. "Come on, now. On your feet. Ain't no good comes from a horse being down like you."

The horse's eyes rolled, so far they was all white for a little too long and Asa knew, like he knew his own name, that she was too far gone, then that dying cowboy groaned. "Come on, Strawberry. Need you to come on."

He'd be damned if that damn horse didn't try to roll up.

Asa pushed and pulled, and the horse got to her feet, swaying. "That's a hell of a try. Now, come on and lean." He got the sweet girl leaning on the wagon so he could get some water in his hat.

It took three hatfuls before the horse slowed down, wandered a step or two away from the wagon to lip at the ground, trying vainly to find grass. It was skinny, but well-cared for, no whip marks to show.

He got more water measured into his hat, then pulled his bandana from around his neck. He'd try to get some in the man on the ground, then try to cool him off with a wet cloth on his neck and cheeks.

This land wasn't for greenhorns. Hell, he wasn't sure it was for anyone that hadn't been born to it. Asa grinned. His momma had been born to it, a woman of the Diné, and so had he. He guessed his Pa ought to be grateful for that, because the damned fool was still alive, white or not.

He knelt next to the man, easing the clamped-down hat off the man's head.

Bloodshot eyes stared at him, the blue swimming in the red like clear water.

"You need to have a sip of water, mister. Not too much."

The man blinked, staring at him like he wasn't sure Asa was real.

Asa sighed, looking at the sky before cupping a little water in his hand and pushing it to the feller's mouth.

The cracked lips scraped against his skin, and Christ, but the man was burning alive. Asa let the water trickle past them, then gave the man another sip. "I got your horse up, but I need to get you up in the wagon. Can you try to help?"

He got a nod, and he'd be damned if the bag of bones didn't shift, get himself moving. Good man. Asa caught the feller under the arms when he sagged, then got him up in the footwell of the driver's seat. Wasn't no room in the back of the wagon.

Damn it all to hell.

"Why me? Why on earth would you leave me some shave tail and a horse that is all knocked into a cocked hat?" He muttered as he lashed the mount behind them and got the mules moving. It weren't bad as all that, but he reckoned those that went before him expected a little bitchin' from their left-behind son. Gave everyone something to do in the heat of the day.

Couldn't do much else.

CONGRATS :D Love the story about how it came about :D