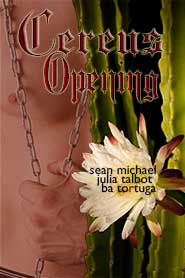 Now that his paranormal resort is built, owner Jonny and manager Duke are ready to open Cereus’ doors to their exclusive clientele. Unfortunately, in these three stories, not everything runs as smoothly as Duke would like, and he’s a werewolf on the verge of tearing his hair out.

In Pack Rules, by Julia Talbot and BA Tortuga, security experts Mik and Van have to learn to work together, even though they have a past, and one that didn’t end well. Werewolf Van wants his vampire back, but Mik is unwilling to be hurt again. Can they trust each other enough to solve their problems, and those of the club? In Downward Dog, Talbot and Tortuga tell the story of yoga instructor werewolf Rian, a city wolf with no way to cope with being courted by the native wildlife.

Finally, in The Bear Facts by Sean Michael, one of the first clients at Cereus, polar bear Nuk has special needs. He thinks IT guy Al is just the man to fulfill them, but will that leave Cereus, and Al, in the lurch? Find out in this second installment of the Cereus series. The Cereus series started off with book one, Cereus: Building.

Mik paced and gnashed his teeth, waiting for the fucking sun to set so he could get out of this room, go look at the perimeter himself, see what was going on.
Three days the cameras had been altered. Two times there had been slaughtered animals, splayed out like feasts. The wolves were getting snippy, and the first wave of guests were coming tomorrow.

There was a knock on his door, and he knew the sound of that preemptive rap. Van.

He was too riled up for this, too hungry, too needy. He tore the door open.

"Well, hey, my little ray of sunshine. I have those diagnostics." Van handed him a stack of reports. Edible. The man looked edible.

"Thank you." His mouth was watering. His scars were right there, on Van's throat. Scars from a time when that body had been his to explore at will.
"Any luck with the cameras?" Van moved a little closer, close enough that Mik could hear the blood pumping in Donovan's veins.

"The extra layer you had me set up. Any luck?" Donovan was staring at him, lips open slightly.

"Uh-huh. Not yet." His fangs grew, his body tight and hard. "Not yet. Soon." Mik didn't even know what the hell he was talking about. "I have to go."

"Mik." Van groaned his name, reaching out for him. "Please."

"Don't. Don't touch me. I can't..." He couldn't not touch if Van's hands landed on him. Not when Van was right there. So big and fine and hot.

"So, don't. Haven't you punished me long enough?"

His body rippled, desire so strong it hurt. He couldn't do it again. He couldn't. "And when your Alpha decides he needs another sperm donor? When it's time to chase lady wolves?"

"I don't have an Alpha anymore. That's why I came here." Donovan stepped back, hands hanging at his sides. "Call me when you have something."

"Uh-huh. I'm going out there." He needed to kill something.

Donovan shook his head. "No. This is deliberate. The only one who views that footage is you. Whoever is doing it is fucking with you."

"With me?" He frowned, shook his head. "This isn't about me." No way. Why taunt a vamp with stuff they found naturally distasteful to eat?

"Then what is it about? Who else would even know but me?"

"I don't know." Mik growled, snapping at the air. "Why can't we catch this fucker? Shit, Jonny's going to have my ass over his knee."

A low growl came from Donovan. "No, he's not. No one does that but me."

Mik came within seconds away from creaming his jeans. Right there. He sank his teeth into his bottom lip to keep himself from moving. He knew how that hand felt on his ass. Knew it bone-deep, and he was man enough to know that that was part of the whole problem.

His kind didn't beg for it, not like he had, didn't want it like he did. Vampires were supposed to be natural tops.

"God, Mik." Van moved a fraction of an inch toward him, and he broke and ran. Oh, not physically. He just turned and walked away. But deep inside he knew he was running.

All the daylight was gone.

Congrats on the release! LOVE the excerpt :D