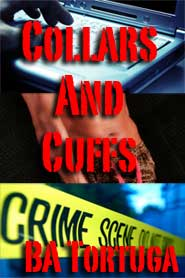 Hannah is a tough cop with a hardcore reputation. She’s not called the Hammer for nothing. It’s a lonely life for her, but all she needs is her work. At least that’s what she thinks until she meets exotic dancer Johnny. John is sexy, even if he is a suspect, but as far as Hannah can tell, he’s also taken.

John is definitely taken with his lover, Ben, but he and Ben play sometimes, and they want Hannah. The three have fun, even when a murderer begins stalking their lives. John and Ben love Hannah to death, even if her police partner Ricky disapproves, but they hope it doesn’t become literal.

Review
Jane Davitt, author of Hourglass, writes: 'Collar and Cuffs' by BA Tortuga is a fast, exciting read with a solid plot and enough heat to melt snow. I finished it at a sitting and enjoyed every twist and turn.

Hannah MacTavish, the cop scarred physically and emotionally by a previous encounter with a serial killer is one tough lady, strong enough to be able to let her guard down around John, a suspect she's investigating in a murder related to another serial killer, when her instincts tell her he's in the clear. John and his partner Ben are equally secure enough in their relationship to be interested in adding a third to the mix, but there's no quick jump into bed, no feeling that the murder plot is secondary. The flirting turned seduction builds slowly and there's a whole lot of tenderness and comfort mixed in with the sizzle.

This is a book with nice weight given to each aspect of the story and the motivations of the leads and a host of secondary characters who give it depth and interest.

The glimpses into the tortured logic of the killer's head are well done and the action builds at a steady pace to the nail-biting climax.

There's a twist at the end that took me by surprise a little, but in a good way, and it worked well with what we'd learned about the characters during the story.

Gritty, funny, hot, exciting -- this one's got it all.

Sample
"Come on, Angie. Shake it. How do you expect Hal to get turned on when you're barely jiggling?" John tried to inject enthusiasm for his cardio strip class into his voice, but it was tough. His head pounded, he was dehydrated as hell, and he had a bruise the size of a dinner plate on his ass. One of the girls had gotten grabby last night.

"All right, ladies, wrap it up. Come on, the big finish. Pretend that chair is his lap!"

"Thanks, girls. See you next week."

The eight women in his class grinned and nodded and started cooling down, and John went to suck down a bottle of Gatorade, hoping that and a couple of aspirin would ease the fucking headache.

The chittering and giggling eased up as the ladies all left, and he sighed, stretched, and almost jumped out of his skin as he caught sight of a woman just standing, staring at him. Brutally cropped tight red curls, freckled, short -- she could have been called pixieish, if it weren't for the fact that she looked solid as a rock and completely willing to kick a man's ass and make him like it.

It was kinda hot.

"I certainly hope so. I'm Detective MacTavish. I understand you worked for an Andrew Parsons yesterday evening." Green eyes, too. Not bad.

"Yes, she's a... paralegal on 38th. Can you please tell me what happened last night during the party?" Short, bitten nails, dry, callused hands -- Lord, Ben would make clucking noises and drench her in moisturizers.

"What happened?" He wasn't stalling, really. Just trying to remember if anything had really been different from any other hen party.

"Yes. You do remember the party, right? Was there booze? Blow? Other men? How long were you there? You know, details." Not the most patient woman on Earth, was she?

"There was booze for sure. Most women need to get liquored up before they stuff bills in my g-string, you know?"

His first boss had told him he was almost too good looking to dance. He could be intimidating. His first boss had obviously never seen a forty year old housewife on straight tequila shots. "I don't remember drugs, but I was only there an hour, and I was kinda busy. As far as I know, the "bride" was the only guy there."

"When did you leave? Did you offer the "bride" extra services?"

John raised one brow the way that made Ben furious when he did it, knowing it had that effect on a lot of folks. "I left after an hour. I think I got there at nine. And I don't do extra services, lady. I don't have to."

"Chill out, studly. We can have this conversation here, or I can call a black and white and we can have it in a few hours at the precinct." That pencil just flew over the pad. "Where did you go after you left?"

"Home. That was an exhausting party. They all wanted to get touchy. You wouldn't believe how grabby a bunch of girls get after a few drinks." She was the studly one, total brusque hard-nose. It was oddly cool, making him stifle a smile.

"You have someone who can verify that? And did Mr. Parsons get grabby as well?" He wondered idly if she was a dyke. Most women at least gawked a little. Hell, most women blushed and got a little flustered around the edges. Not this one.

I have just downloaded iStripper, so I can watch the sexiest virtual strippers strip-teasing on my desktop.