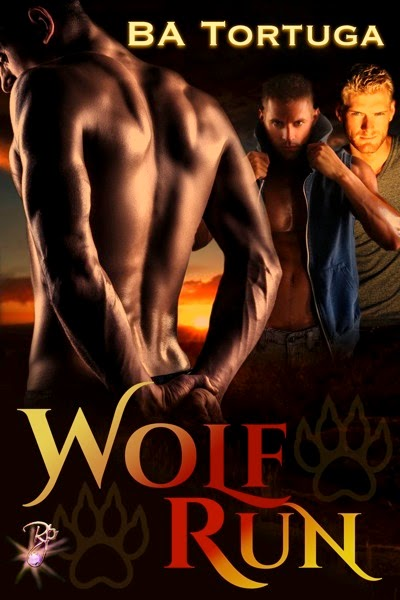 A lifetime to explore!

Mick is a lone wolf in all ways. He’s left his pack, he’s left his homelands and he’s on the road, footloose and fancy free. Well, at least until he wanders up to a fence and finds a little wolf running his ass off behind it. Mick stops to let the pup out and is stunned to hear the young wolf, Scotty, tell him “no”. Scotty's mate and best friend, Danny, asked Scotty to stay behind the fence, so he will be safe while Danny fights to support them both. All this leaves Mick’s fur standing on end. Maybe, Mick doesn’t need one mate to bring him home. Maybe, he needs two.

He dropped his wolf form as soon as he was out of sight, his body lengthening into a biped. “Dude, why are you in a cage?”

The pup yelped and scrambled back, leaping onto the porch.

The pup looked at him then boom, a lovely lean man stood there, shaggy blond hair curling around his face. “H-hey.”

“Hi. Would you like to run? I can get you out.” God, the kid was adorable and plenty old enough to play.

“Oh. Oh, no. Daniel would be so mad at me for getting out again.” Eyes the color of brandy caught the sun. “Daniel says I’ll get hurt, lost.”

“Does Daniel mistreat you?” Because Mick could beat someone down just for fun.

“Daniel? My Daniel?” The pup’s laugh was happy, joyous, the look on his face fond and warm. “Oh, no. Daniel loves me. He works for both of us. He brings me half his food every day. He’s a good mate. We… The Alpha said ‘too many males’, and we… Daniel pays for this home, he brushes me, he works all day every day.”

“Do you work?” Mick tilted his head, waiting, nodding in sympathy. Damn, it was hard for bachelor males to manage when thrust out on their own, especially ones who needed an alpha as much as this one did. It seemed like the kid barely held it together, at least on two legs. Sweet baby.

“I paint. I paint pictures, and I wash Daniel’s uniforms. I… I get… He follows rules better than me, and he can stop a shift, if he needs to. He can even work during the moon.”

“I’m Mick Eagleheart. I like your belly. I kinda want to lick it.”

“Oh.” Scott jerked, and his cock started to fill, curving up toward the flat belly. “Oh, my.”

“I probably should go inside.” That sweet nose was working hard, smelling him.

He caught the scent of Scott’s need, too. “I won’t bother you if you don’t want me to. I promise. I just hate to see you caged.”

“I want… I want you to come inside, but… I should ask Daniel.” Scott moved down the stairs, heading toward him.

“You should, huh?” When Scott got close, Mick saw the shadows under the man’s ribs. “Are you hungry?”

“Uh-huh. All the time. He brings me the biggest half of his hamburger and almost all the fries, every day.”

Mick raised a brow. “You eat one meal a day?” That would never do. Never.

“Every night. He brings me food every night.” Scott was close enough to touch now.

“Do you want to hunt with me? I promise to bring you back.”

“Will I get in trouble?” Scott nodded, eagerly, the motion at odds with his worried words.

“No, I swear.” The high mountain desert teemed with birds, rabbits and chipmunks. It would take twenty minutes to get something yummy.

“I have an amazing sense of direction.” And he could tell Scott really cared for this Daniel. Mick would never want to come between mates.

“Cool.” Scott climbed over the fence and into Mick’s arms.

“Hello, there.” What a pretty puppy this one was. So starved for a strong hand. Daniel must be another pup, not a big male. He leaned in and sniffed, the hint of another sweet beta like perfume.

Lovely. He’d have to check in with Daniel, as well. Later. Impulsively, he hugged Scott tight. “Let’s run.”

It took seconds before the pup was fuzzy beside him, excited and happy. Perfect. Mick barked, his wolf coming easily, and he led the way off into coyote country. Scott ran beside him, vocal and chatty, telling him about everything wonderful in the world. Mick liked it, the little noises. Oh, it would make it harder to find prey, but that was all right. How often did you get to experience that type of pure, unadulterated joy?

This kid was too cooped up, and Mick would bet the absent Daniel was, too. So many wolves forgot how to live close to nature.

Scott bounded up to him, licked his muzzle then bounced away. They would have to play, he could tell. He raced to Scott, nipping that fine tail. Scott spun, sand flying everywhere, and the pup barked furiously.

Letting his tongue loll, Mick backed off, tail up, head down.

Scott stopped, stared then plopped his front end down, bowing back. Good boy. Such good instincts.

Mick chuffed softly, praising, admiring, and that tail wagged so hard the pup nearly fell over. Sweet baby boy. A rabbit darted by, and they were off.