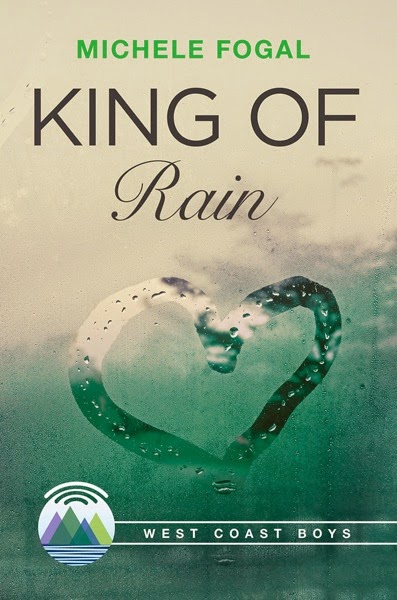 Enter to WIN a free e-book of Michele's upcoming release! Thanks for having me BA Tortuga! What a pleasure to be here and I'm especially excited to connect with a fellow book lover AND music lover!

Each book in my West Coast Boys series, published by Dreamspinner Press, has its own Soundtrack, and Book 2, King of Rain is no exception.

The stories are all Male/Male love stories, set in the diverse West Coast culture, against a backdrop of snowy mountains and temperate rain forests.

A consistent theme in the series is how we mix urban technology with wilderness access. Listening to music while running across a suspension bridge is just one example of how these elements can fuse into a new kind of wealth - personal empowerment. We forget how connecting with nature and connecting with art have so much in common, and technology can be the tool that brings things together.

Here's an excerpt scene with its accompanying song (although, hmmm, there is no bridge in this scene, but there are some iconic Vancouver-isms).

Story background: Jeremy has just been dumped by his boyfriend Skyler over the phone, or rather has just realized HOW over their relationship really is, and has decided to go running to escape his own reaction.

Here's the link in case the player doesn't work for you -- http://grooveshark.com/s/Enemies/4PYnLW?src=5

I turned off Davie Street pretty quick, though, because it was crowded and ran downhill towards the beach through some low-rise apartment buildings, pushing my body and blanking my mind. The seawall wasn’t packed because it was February and drizzling, but there are always some people there. The seawall pathway has lines to keep the bikes and the runners in their own lanes, and tonight there were enough people to make the lines useful. I set off towards Stanley Park and ran with my tunes cranked and just tried to enjoy looking out over the ocean. The big freighters are always parked in English Bay, like toy battleships in the misty air, and the gut-deep sound of their foghorns stretching out two long notes did something to calm me.

The good thing about running is your mind gets freed up.

The bad thing about running is your mind gets freed up. And it did, of course. I thought about the night I’d first picked Skyler up at Celebrities, his innocent face wide open as he took in the oldest gay dance club in Vancouver.

“Enemies” by Hannah Georgas blasted into my earbuds talking about cuts too deep to mend and making enemies. Is that what me and Sky are now? I ran a little faster.

I thought about the way he’d learned to dance without holding back when we went out together, him with his cute fake ID. God, he was just a sweet kid, and I’d taken him. Yeah, he was in grade 12 and I was only four years older, but they were big years. I’d figured it all out—how to style my hair, how to dress, how to talk, how to smile, when to grind up against someone and turn them on. Had Skyler really had a choice in the face of my onslaught?

And I loved that, didn’t I? The power of knowing I could seduce and take what I wanted? Wasn’t that the best feeling?

I ran harder, wanting to sweat him out of my skin, wanting to stop picturing his smooth skin stretched out on my bed. I hadn’t cared about sharing him. Sure, I didn’t want him to play around without me, but why hadn’t I worried about losing him? Was it because I just assumed he was mine? Some couples played around because their love was so strong that nothing could shake it. That certainly wasn’t it for me. I think I just had this morbid fascination with finding out where his boundaries were. God, what if he’s with a guy we hooked up with! Wouldn’t that just serve me right?

You can also see the playlist here: http://michelefogal.com/soundtrack-king-rain/ King of Rain is coming out Mar 13, 2015 so check my website for more on other stops on my Blog Tour, Give-Aways, Excerpts and more.

I'd love to know which song you like best on the Soundtrack or what you think about overlapping story and music. I'm always on the look out for love songs, so let me know your favourites too!

That was a pretty intense excerpt. I think music can really set the mood for a scene when reading.

Enjoyed this little sneak peak Michelle. Love the local setting. The 'West Coast' theme is so relevant and perfect. Good luck with the blog tour!