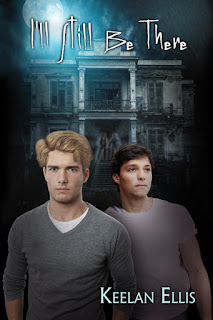 I’d like to talk about two of the characters in my book, Clay Bailey and Silas Denton. Clay and Silas are long dead when they come in contact with Jess and Eli, but the story of their lives is an important part of the book. These men met and fell in love in 1950, when homosexuality was still a crime. The reader gets a glimpse of each boy’s coming into his sexuality, and the obstacles these experiences create as they work towards trust with each other. I felt it was important to fully explain who these characters were as people--and especially what they meant to each other--in order for the reader to wrap their head around what they do as ghosts. They do something that’s actually pretty terrible, and destructive, and that’s something that both the other characters in the book and the reader have to be able to get past.

I cannot adequately explain how much I loved writing these characters. I fell in love with both of them as I wrote them, and I hope the reader has the same experience. Their love for each other is deep and lasting, and one of my favorite moments of the book is when they discover that same sex marriage is legal in the state where they’d met. It’s bittersweet, since they’re dead and can’t get married. They considered their relationship to be a marriage, and always treated it as such, long before such an idea had occurred to anyone as a real possibility. They are also rather sarcastic as ghosts, probably even more so than in life, and have little patience for what they see as silly or pointless worries. They’re full of advice and have no problem laughing at you if they think you’re being stupid. They still love each other, and have no desire to move on anywhere. Also, they think cell phones are really cool. I think they might like them even more than they like marriage equality.

Blurb:
The summer after high school, Eli Dunn and Jess Early explore an abandoned brothel in the rural Florida Panhandle. They’ve always kept their mutual attraction unspoken, but in an upstairs room at the end of the hall, everything changes. Suddenly, all the longing Eli and Jess have tried so hard to conceal bursts free, and passion like they’ve never experienced comes to light, along with the ghosts of Clay Bailey and Silas Denton, murdered owners of the brothel. And Clay and Silas have no problem possessing Eli and Jess in order to express their love for each other, without thought for the living.
Deeply disturbed by the experience, Eli and Jess part and try to get on with life as best they can. But after several years, Eli returns to Florida, only to find that Jess has made some questionable choices. These eventually lead him back to the abandoned house and a confrontation with Eli. Old scores are settled and Eli and Jess reunite. But Clay and Silas’s ghosts aren’t finished yet, for they’ve always believed in the power of open and honest love.
***

Eli was dreaming of rain. Specifically, of driving in the rain, drops beating down on the roof of his piece-of-shit car as he made his way down a dirt road in the dark, unable to see more than a foot ahead, the road unnaturally slippery under his tires, and the brakes barely functioning.

Eventually, he climbed closer to consciousness and recognized the clatter as something entirely different from rain. It was the sound of gravel being tossed against his window, repeatedly, until he woke.

He went to the window and peered down to see Jess's  grinning face looking up at him. He was holding up a bottle of whiskey, as if he hadn’t been avoiding him the whole week since graduation. Eli figured he had plenty of reasons to be annoyed with him, not the least of which was that it was the middle of the goddamn night, but he was too glad Jess had come over.

He pulled his head back in, closed the window and dressed himself in the jeans and T-shirt he’d cast off before bed, then walked quietly downstairs and out the kitchen door where Jess was waiting for him.

“What are you doing?” Eli asked him as he stepped outside.

“What’s it look like? Let’s do some drinking, son.” Jess clapped him on the arm and started walking toward the road where his truck was parked. Eli stared after him. He seemed keyed up, edgy, and it was weird that he’d come over at this hour, acting like that was a perfectly normal thing to do.

Eli followed him, yawning. “Why didn’t you suggest this earlier? It’s the middle of the goddamn night.”

“Where you want to go, man? I hope you got something in mind, after you dragged me out of my comfy bed.”

“Well, seeing as how it probably wouldn’t go over too well with your daddy if I joined you in there, we’ll just have to figure something else out.”

Eli looked over at him sharply, but Jess was walking around to the driver’s side of Gary’s old truck and wasn’t acting like he’d said anything strange. It was just a joke, of course.

They drove out of town a ways and parked behind a long-abandoned house, half-caved in and dangerous-looking. They got into the truck bed and started passing the bottle back and forth. Jess really was in a weird mood, and he started talking about how he found an old Bible that had belonged to his great-grandmother. It had all sorts of stuff written in it, and some old letter inside. Doreen had stuck it in the attic with a bunch of other old family artifacts, never really looking through it—she was not the sentimental type, to put it mildly.

Her father’s people had come to Florida from Ireland, via Boston, Jess told him. He’d moved to the panhandle to make his own way, out from under the yoke of tradition and his nine brothers and sisters. When he married a Choctaw woman, there was a great scandal in the family. When she refused to convert to Catholicism and he married her anyway, he was disowned.

When he stopped talking, Eli just looked at him for a while. His face was so familiar, and so unique. Eli had never seen anyone who looked like him before. He had a sort of black Irish look, with curly dark hair and pale, lightly freckled skin, but his eyes weren’t blue. They were so dark they were

“I’ve always wanted to see this place. It’s supposed to be haunted. Did you know that?”

Eli looked over at him, and thought he looked deadly serious. He scoffed and said, “You don’t believe in that shit, do you?”

“There’s plenty in this world that’s beyond our experience, Elijah.” Something about Jess’s tone made Eli stop laughing. Something about the way he’d said Elijah, though that was nothing so unusual.

He always used the whole name, never the nickname. He never had, even when they were kids. Eli had always liked it coming from him, though he wouldn’t take it from anyone else. From anyone else it sounded like a taunt.

“Ghosts?” Eli asked. His voice was rough from the whiskey.

Jess shrugged, and looked right at Eli. “I don’t know everything, and neither do you. There’s all kinds of weird shit in the world, you know?”

“Anyhow, the story goes, there were these two old boys, Clay and Silas, running pussy out of this place, back in the fifties and sixties. You can see how big it is. They were living here, the two of them, and all the whores. It was a popular joint, people came from all around over to drink and fuck. Thing is, they catered to some specialized tastes.”

“Oh yeah?” Eli yawned and then asked, “Like what?”

“Well,” Jess continued, “one of the girls was black. She came from New Orleans, I think.”

Eli laughed again and asked, “You’re just making this shit up, aren’t you?”

Jess looked offended at the very idea, and he said, “I’m only telling you what I heard, Elijah.”

“All right, all right. Go on, then. Let’s hear it. So they had a black whore in their place. That’s not such a big fucking deal.”

“Well no, not now, but this was like sixty years ago,” he said. “But no, that wasn’t the really exotic thing. Word was, they had a boy working there too.”

“Really.” Eli couldn’t look at him. He busied himself taking another drink, and wondered why the hell Jess was telling him about this.

“Yep,” Jess replied. “People would come from pretty far, because there just weren’t a lot of places around here to find that sort of thing.”

Eli snorted a laugh and said, “I’d imagine there still aren’t, not around here.”

“True enough. And if you liked boys, it wasn’t like you could just get yourself a boyfriend or something, not in those days. Paying for it would’ve been your only option.”

“I guess you’d want to travel a little for something like that. It’s not exactly the kind of thing you’d want getting around, is it?” As uncomfortable as he was, he was starting to warm to the story.

He’d never heard anything about this place, and it was sort of fascinating.

“Nope. This is why these guys were so successful, because they knew how to keep secrets. They had plenty of their own.”

Jess was looking at him pointedly, like he’d just revealed something big, but the booze was making Eli’s mind work a little slower. He didn’t understand what Jess was trying to say.

Eli frowned in confusion, and Jess smiled. He said, “They were together, see? Screwing each other. They’d been running that brothel and living there for fifteen years.”

“Oh.” Eli felt sort of dumb not to have put that together, and again he wondered if Jess was trying to say something to him, maybe trying to get him to admit what Cassie had been able to see so clearly. He wasn’t going to be goaded into telling Jess anything.

“Well,” he asked, “if they were so goddamn good at keeping secrets, how is it that you know about it now?”

“Same reason the place is haunted. Some bad shit went down here. Everything came out after that.”

Jess stood up and stretched, then walked to the back of the truck. Eli looked up at him and said, “You going to take a piss?”

“I am. And then I’m going into that house and looking around. Are you coming?”

Eli looked doubtfully at the house. He really didn’t want to—it was probably moldy as hell and would smell disgusting in there. He knew Jess would just think he was scared, though, so he said, “Yeah, sure. Why the hell not?”

On All Romance E-books: https://www.allromanceebooks.com/product-i039llstillbethere-1803717-145.html

What a great guest post!!! Thanks for sharing :D