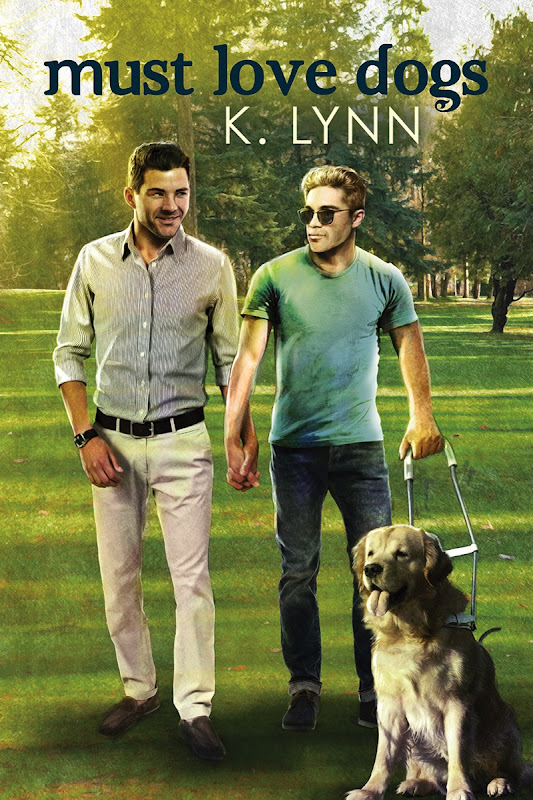 Must Love Dogs, my latest novella from Dreamspinner Press, focuses on the emerging love story of Ben and Jay.

Since a mugging a year ago, Ben’s lived with blindness. Despite an art career on hold and a deadbeat boyfriend who left him because of his disability, he's finally getting his life back on track. Ben is gaining a new sense of independence thanks to his guide dog, Colt.

But Ben’s carefully balanced life is thrown into chaos when veterinarian Dr. Jay Connor hits Colt with his car. While Colt is on the mend and recovering nicely, Ben finds that Jay is not only fond of Colt, but also quite interested in Ben.

However, one overheard conversation might put a stop to their romance before it can grow into something more. Maybe Ben’s destined to go it alone in the dark. Or can Jay help him see there’s still a chance for happily ever after?

Ben is the main character, and he's been through a lot in his life thus far. He thought he had everything in line – a successful career as a painter, a wonderful home, and a loving partner. In one instant, though, all of that was taken away from him. A mugging gone bad took away his sight, which took away his ability to paint, and the strain of recovery took away his partner. Ben was at rock bottom and has been slowly making his way back up over the past year. He had Colt, he was surviving, and he wasn't looking for anything else. That is, until fate had a way of throwing him yet another curveball.

Coming up with Dr. Jay, I knew that I wanted him to be different than Ben. He hasn't gone through the tragedy that Ben has, but instead has been focused on his veterinary practice and his love of animals. Like Ben, he wasn't really focusing on his love life, but he was at least open to the possibility. And good thing he was, since Ben literally fell into his path, and Jay took that as a sign. Even when Ben was resistant to what may transpire between them, Jay was persistent and that persistence paid off for them all.

And finally there's the lovely Colt. He's the reason Ben and Jay got together, and he's the grounding point between them. Ben loves Colt, Dr. Jay does as well, and he is the third point in their triangle. He's a very good guide dog, committed to his job, but he's also a puppy at heart and very loving to those around him. For those wondering, Colt is a mix of Labrador and Golden Retriever breeds, which are the most common types used as guide dogs in the United States. Colt was a good student and a good match for Ben. Together, they're navigating the world around them and learning new experiences along the way.

K. Lynn has been an avid reader and writer since childhood. While in college, K. Lynn increased her involvement in LGBT issues and writing within the LGBT fiction genre. She has become a long-time fan of the authors that seek to explore the commonality that exists within all sexualities and genders. Most of K. Lynn's work features LGBT characters, many of whom are in established relationships and show how love perseveres through every trial and tribulation that life holds. She also has a particular interest in seeing transgender characters gain a larger foothold within the LGBT fiction genre, hoping that the market for these works expand in the future. Contact K. Lynn at writerklynn@gmail.com or follow her on Twitter @WriterKLynn

Must Love Dogs released from Dreamspinner Press on July 22nd and you can pick it up from your favorite online retailers.

Oh this sounds like a LOVELY book! I"m running off to buy it RIGHT NOW <3333