Firemen and Smokejumpers a Guest Post by Julia Talbot

Hijacking the wife's blog today to talk about my new story on ARE for their Fearless line. It's on pre-order right now with a general release date of July 1.

It's been years since I wrote firemen, but I couldn't resist since the call asked for heroes/men in uniform. Anyone who knows me knows I'm obsessed with mountain disasters. Avalanche on Everest? Wildfire flashover in Glenwood Canyon? Giant boulder falling on highway and closing it for days? I'm there. I love the dynamics of an emergency, the way first responders work. I hate to see people get hurt, so don't think I'm a ghoul, but those disaster stories have built in drama that does make a writer salivate.

So, that's where Out of the Frying Pan comes in. A wildfire season. Two former lovers who meet again ten years later and have to work together. Sloane is a wildfire smokejumper. Jenson is a municipal firefighter. Together they're like gasoline and matches... 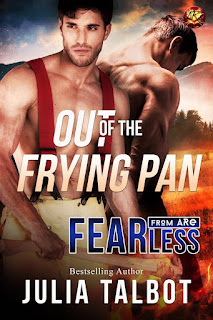 Trust comes at a price.


Jenson Parkinson can't believe it when Sloane Marlen shows up at his Colorado mountain fire station. They were lovers years ago, until Sloane broke Jenson's trust, and his heart.


Sloane knows he's not guilty of the misdeeds Jenson believes he committed, but he never figured out how to convince Jenson. Or how to get over him. Can Sloane grab this second chance with both hands and teach Jenson he's worthy of trust... and love?

Aaacccckkkk I want it NOW amazing cover and loved the blurb.