Adding to the Collection! 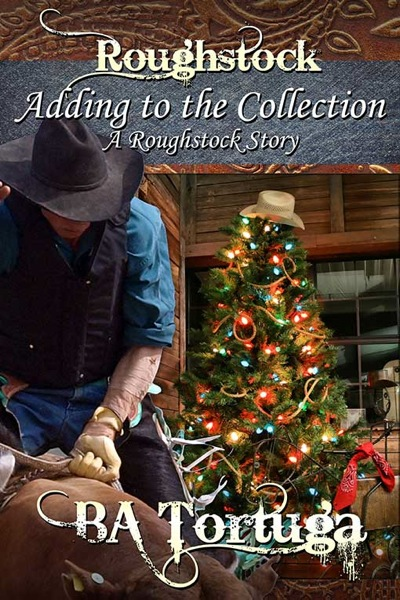 Rancher and homebody Derrick loves going to the bullriding finals in Reno, especially when he gets to see his favorite rider, Stone. This year he gets way more up close and personal with Stone than he ever expects, and all of his fantasies come true.

After Reno, though, Stone has nowhere to go for Christmas, so he shows up at Derrick’s ranch, knowing there’s something about Derrick that makes him think of settling down. Will Derrick panic and send Stone away, or will he had the rodeo cowboy to his collection?

Stone sat on the rail against the wall, sipping his beer and humming along with Alan.

He was in the money tonight, and that was the third round he'd ridden. It wasn't going to win him a championship or any such shit, but it was going to get him to January, God willing and the creek didn't rise, and it was going to keep him in the top twenty, which meant sponsorship money come next season. Praise Jesus and bull ropes.

The crowd was jumping like a frog in a skillet tonight -- the buckle bunnies out in spades, all glitz and sparkle and more fake boobies than you could shake a silicone stick at. Sometimes he wondered what made anyone work so hard to look so fake, then he remembered how much money he spent on getting his jeans starched and he'd feel like an asshole. Still, those spider eyelashes scared the living fuck out of him. They looked like they could cut a man. Flap, ow!

Now, that big old boy who just walked in wearing Wranglers and a pressed, snap-button shirt? He wasn't scary a bit. No, sir. He was pretty with a capital P. Solid and broad, with hands that would be rough and hard on a man's skin -- that was just Stone's type. Sometimes a cowboy needed a good, hard ride. This one looked like he didn't get to town much. Oh, the boots were clean, and the hat was obviously expensive, but the guy scanned the crowd like he was starving, like he had a powerful itch.

Like the message actually went through, the man glanced at him, then stared, eyes widening a little. Down boy. Could just mean he knew bullriders.

He tipped his hat, though, nodded. It was a fine fucking line -- straddling between making sure someone knew you were interested and not getting your ass handed to you. The message was received, and received well, he thought. The man started moving toward him at least, and Stone didn't think it was for an imminent ass-kicking.

He stayed where he was, holding those dark, hungry eyes.

Coming to a stop about a foot away, the man nodded. "Buy you a drink?"

Oh, fuck him raw, that was a pretty man.

"Sure. Two Bud Lites, please," the man told the waitress who hovered nearby. "I'm Derrick."

"Stone." He held one hand out, shook. The handshake was everything he could hope for, warm but not sweaty, that hand big and callused.

"Oh, now, a man likes to hear that. You out just for the event? You liking Reno?" You wanna fuck?

"I am, and yeah. I come every year. First time I've seen you here." Those eyes weren't as dark as he thought. Oh, they were a nice, deep green, but the pupils were dilated, Derrick looking at him like he was dessert to a good meal.

"I been on the little tour for a while. This is my first time with the big boys."

"You did yourself proud." Derrick swallowed hard. "Looked good doing it, too."

He tipped his head, the brim of his hat dipping. "Much obliged."

"You, uh, do any private demonstrations? Of how you ride?"